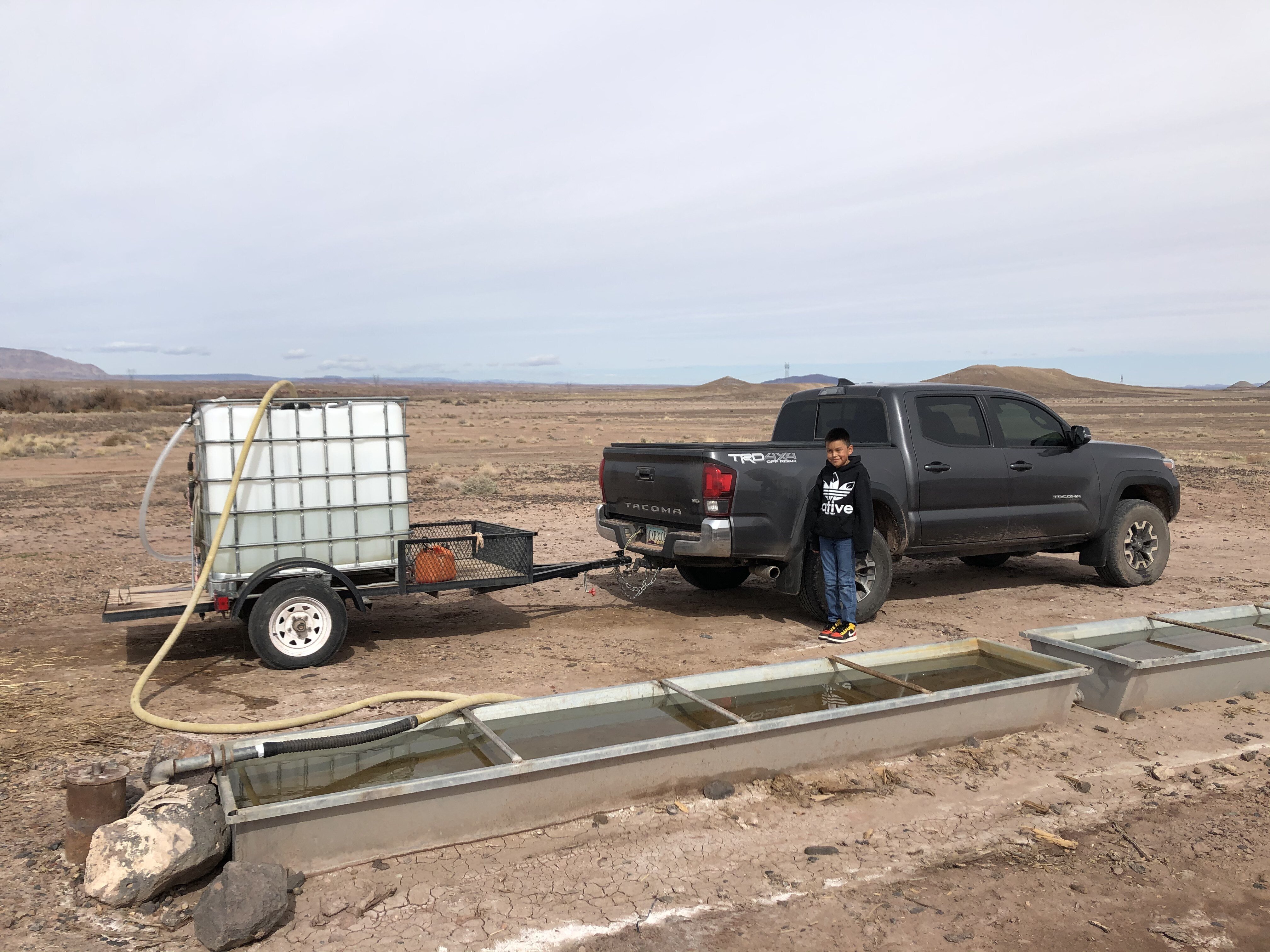 Shanna Yazzie’s 10-year-old son stands by the family’s truck as water for their use is pumped from a nearby windmill.

Thwarting the coronavirus means washing hands and staying hydrated. That’s not easy for the 2 million Americans still without plumbing in 2020.

Two weeks ago, as the coronavirus was spreading across the U.S., Shanna Yazzie loaded the bed of her gray Toyota Tacoma pickup truck with as many empty, five-gallon containers as she had in her house and drove 25 miles on unpaved desert roads looking for a place to fill them with water.

This is a routine for Yazzie, 38, one of the 2 million Americans who live without access to running water. She lives in Cameron, Arizona, a town of fewer than 900 on the edge of the Navajo Nation, where one-third of the reservation’s 350,000 residents lack running water and sanitation.

Native Americans are 19 times more likely to lack indoor plumbing than white Americans, according to a report published last November by the human-rights group DigDeep, where Yazzie works, and the nonprofit U.S. Water Alliance.

Keeping water stocked in the home she shares with her 10-year-old son, 17-year-old daughter and 79-year-old mother is a chore on a good day. But as confirmed cases of COVID-19, the respiratory disease caused by the novel coronavirus, surged from two to 39 on the reservation this week, the Navajo phrase tó éí ííńá ― “water is life” ― took on a warped new meaning. Yazzie has struggled to tamp down a nauseating sense of dread.

“The anxiety is sickening,” she said by phone Tuesday. “Your mind keeps racing with ‘what ifs.’ You can’t eat. You lose your appetite. You’re shaking. You’re sleepless. Your mind, it just constantly races with negative thoughts. Thoughts like, ‘We’re gonna die.’”

The water source she usually depends on for bathing and washing hands ― a habit public health officials cite as a minimum requirement to protect yourself from the virus ― is a windmill pump three miles from her home. She drives over and fills a large tank secured to a trailer. Lately, she and her family have been using the water faster than usual as they wash their hands compulsively. They conserve by showering on a staggered schedule.

Before the pandemic, her mother would shower daily at the nearby senior center. At home, as an elder, “she does as she pleases,” Yazzie said, which usually means she showers every two days.

Testing conducted by the National Institutes of Health has found that the family’s water supply, located close to an open uranium pit, is loaded with radioactive particles and toxic metals such as arsenic. A quarter of Navajo women and infants screened as part of the first phase of a University of New Mexico study exhibited uranium concentrations exceeding the levels found in the highest 5% of the U.S. population, officials announced last year.

“It’s not the safest, but it’s the only water resource around here for us,” Yazzie said. “That’s what we wash our hands and bodies and dishes with, and give to our dog and our plants.”

But they can’t drink that water. Sometimes, Yazzie drives off the reservation to one of the big-box retailers along the highway to stock up on bottled water. But fearful of the crowds and wary of potential price gouging, two weeks ago Yazzie instead donned a pair of gloves and mask and headed to Tuba City, the Navajo Nation’s largest community, where much of her extended family lives.

Normally Yazzie would fill her bottles at the spigot outside her aunt’s house, meaning it would only cost her about an eighth of a tank of gas and a “thank you. But, knowing the virus posed the highest risk to elders and wanting to adhere to distancing with her aunt, she instead headed to her sister’s house.

Her niece directed her to use the sink. But the five-gallon containers wouldn’t fit under the faucet. She topped off as many one-gallon jugs as she had, loaded them into her truck and headed a mile down the road to her aunt’s house anyway.

There, she grabbed the hose and filled all her jugs. She recoiled the hose, shouted a thank you to her relatives, hauled the containers into her pickup and set off. She drove slowly, careful not to hit a pothole in the unpaved road and knock over the bottles in the truck’s bed.

Yazzie is grateful that she’s able-bodied and doesn’t mind the taxing hauls. Her 2018 pickup is in good shape, making the job of collecting water exponentially easier. At DigDeep, which advocates for water access, she helps set up water systems in homes in remote parts of the reservation, such as Navajo Mountain, where some live up to 40 miles from the closest windmill pump.

She suspects that the pandemic may raise awareness of social inequities across the country, but that it will do little to increase water access on reservations, a long-standing problem that stems back to lack of funding and conflicts over state and tribal jurisdictions.

“It seems like a big task and annoying task, and it can be,” she said. “But if you’re young and you have kids willing to help you, it’s not so bad.”

Back home, she carried the bottles out of the truck and lined them up in the hallway of her home. She marked the bottles with a blue note to indicate these were for drinking. By Tuesday, she was already down to 25 gallons. She expected the supply to last her about another week.

Until then, she’s staying put. But when the water runs out, she said she’ll go gathering at night, when the windmill is deserted and her relatives are in for the evening.

“The interactions with my family members, that’s hard because we come from a society where we naturally greet each other all the time, talk and hug each other,” she said. “My fear is that my aunt or uncle are going to come out and want to talk to me. Say, ‘Sit down and come eat with us.’ That’s something we do all the time. It’s going to be hard to stay away.”