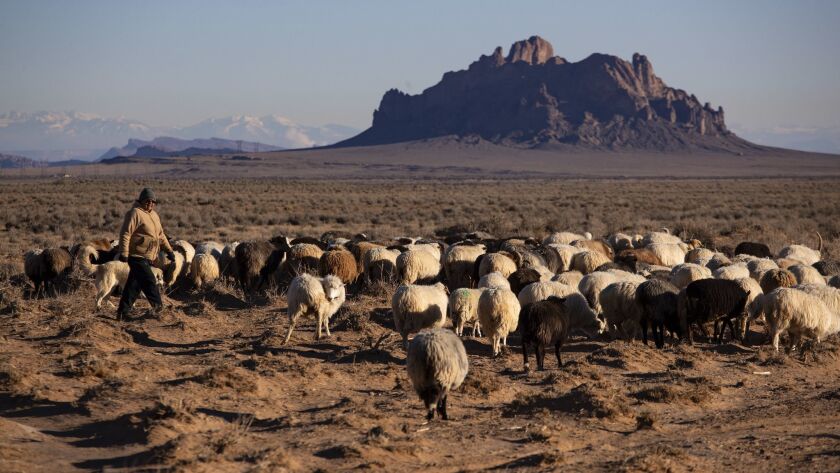 Road closures, mask mandates and weekend curfews have not stopped a troubling upward trajectory of coronavirus-related deaths on the Navajo Nation, a high desert landscape with underfunded hospitals and overburdened doctors stretching across three states.

As more states begin to ease stay-at-home orders, a desperate attempt to halt coronavirus cases is underway on the country’s largest reservation, which spans Arizona, New Mexico and Utah. But such efforts have proved difficult, because of the remoteness of the reservation and the lack of electricity and running water in some homes.

“We’re getting the message out through radio … from word of mouth, door-to-door. There shouldn’t be anyone who says they don’t know what’s going on with COVID-19,” Navajo Nation President Jonathan Nez said during a virtual town hall this week. “It’s up to us to translate to our grandma and grandpa; it’s our obligation to keep our citizens safe.”

The crisis is compounded by the population’s prevalence of preexisting ailments, which makes members more susceptible to the virus. Cassandra Begay, a local activist, said abandoned uranium mines had led to higher rates of cancer on the reservation — health conditions that can prove deadly if a person contracts COVID-19.

“We’re vulnerable,” said Begay, who grew up on a rural stretch of the reservation with no running water or electricity.

On Wednesday, the Navajo Nation reported nearly 2,500 confirmed cases and at least 75 deaths — more than in all of Utah, where about 60 people have died.

A day earlier, Navajo Nation officials, who represent 175,000 residents, traveled to Phoenix for a roundtable meeting with President Trump that, among other things, included discussion about the virus’s toll on Native American populations.

From the outset, Nez expressed concern that the federal government is forcing individual tribes to apply for their share of the $8 billion. A coalition of tribes, including the Navajo Nation, filed a federal lawsuit in recent weeks against the Department of Treasury, seeking to keep the money out of the hands of Alaska Native corporations. Established through a 1971 law governing how Alaska Natives manage their land, these corporations have boards of directors and shareholders.

Hours after the meeting with Trump on Tuesday, the Navajo Nation announced it would receive roughly $600 million in federal funds from the stimulus package to address its coronavirus crisis.

The tribe has also been helped by money from abroad. Officials from the Navajo and Hopi COVID-19 relief fund say they’ve received almost $500,000 in donations from Ireland. The funds are a nod of appreciation to indigenous Americans, who in 1847 raised $170 — about $5,000 in today’s currency — in aid for Ireland during its Great Famine.

While the tribe awaits the federal money, some of which will go toward testing, officials are working with state and local governments to slow the spread of the virus.

Strict weekend curfews have been in place on the Navajo Nation for the last month, with residents only allowed to leave their homes to shop at grocery stores. At the reservation’s four inpatient hospitals, volunteers from around the country have arrived to help support overcrowded emergency rooms.

In Gallup, N.M., which is along the eastern edge of the reservation, roads have been barricaded for several days since New Mexico Gov. Michelle Lujan Grisham invoked the state’s Riot Control Act to prevent the flow of traffic from the reservation into the city. McKinley County, which includes Gallup and part of the Navajo Nation, accounts for roughly 3 in 10 cases statewide and has one of the highest rates of infection in the country. The order is set to expire Thursday.

“A problem in one part of our state, with a virus this contagious, is a problem for our entire state,” Lujan Grisham, a Democrat, told reporters when invoking the act.

These days, trading posts and restaurants sit vacant. El Rancho Hotel, where Hollywood stars like John Wayne would regularly stay while traveling Route 66, is open but running far below its peak capacity. Most days, the roar of freight trains that run parallel to Interstate 40 are the only sounds through downtown.

On Wednesday, the local Walmart shuttered its doors for the day as the state mandated that anyone entering a business must wear a mask.

For many who live on the Navajo Nation, the pandemic has been an unsettling reminder of past outbreaks.

During the 2009 outbreak of H1N1 flu, also known as swine flu, the death rate for Native Americans who contracted the disease was four times that of all other racial and ethnic groups combined, according to a study by the National Institutes of Health. Underlying health conditions contributed in part to the disparity.

“Thirty percent of our Navajo residents still don’t have access to running water,” said Begay, noting that Centers for Disease Control and Prevention practices like consistent hand-washing can prove difficult.

Angelo Baca, who also grew up on the Navajo Nation and now lives on the north side of the reservation in rural Utah, said the virus has offered some an opportunity to return to Native practices. Younger generations, Baca said, are increasingly taking the lead on the essential work of farming this spring, planting corn and raising sheep, as elders remain indoors for their safety.

“We have to depend on ourselves and our traditions,” Baca said.

“The pandemic has helped put that into focus for some people,” he said. “I’m sure that focus on depending on ourselves will continue moving forward.”