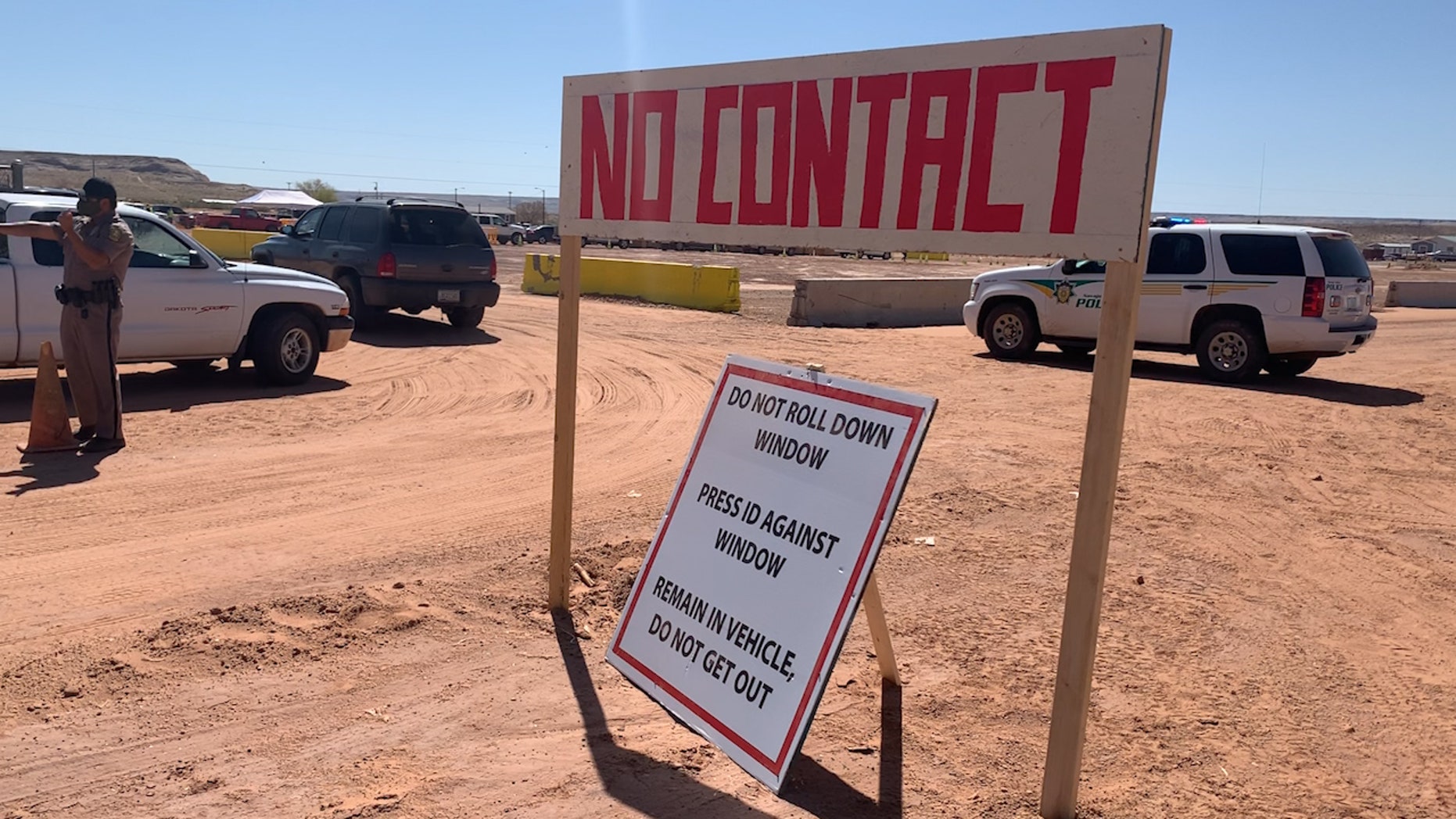 The Navajo Nation has enforced a daily curfew from 8pm - 5am in an effort to stop the spread of COVID19. (Navajo Nation )

Law Vegas
While states across the country are reeling from the economic and health impact of COVID-19, the more than 500 native communities scattered across rural America are facing their own battle with the deadly virus.

“We have a population where we have a lot of elders in the community. We have a lot that has underlying health issues,” Amber Torres, Walker Paiute Tribe chairman, told Fox News. “So, if it were to get here, it would probably wipe out our community. And I definitely can't have that happen.”
With limited access to health care, lack of personal protective equipment and an older demographic that already suffers from high obesity and smoking rates, the coronavirus creates a disastrous situation for the 574 federally recognized American Indian nations.

“Our people suffer disproportionately from diseases like diabetes, hypertension and cardiovascular disease. We are basically like the profile for what the CDC [Centers for Disease Control and Prevention] says these are the most vulnerable populations,” Stacy Bohlen, National Indian Health Board CEO, said.

Among all racial and ethnic groups in the United States, the American Indians and Alaska Native population have the highest prevalence of cigarette smoking, according to a 2016 report from the CDC. Cardiovascular disease was the leading cause of death, and Native Americans are twice as likely as white people to have diabetes.

Many tribes are located in rural America and are hours away from the nearest hospital capable of treating COVID-19. Food supplies are limited and runs into town for groceries put members at risk of potential exposure to the virus. In some cases, tribes don’t even have access to running water.
“I think about, you know, my family home in the villages in Shungopavi, there isn't running water and so we bring in water by buckets or by the gallons or the five gallons,” Arizona State University professor Angela Gonzalez, who is a member of the Hopi Tribe, told Fox News. “I don't mean to make it sound overly dramatic, but I mean, in some instances, it's very much like third-world conditions.”

Despite taking preventative measures as early as January, the Navajo Nation has been one of the hardest-hit tribal communities, with more than 1,000 confirmed cases and over 40 deaths

“We did our very best to keep this virus off our nation,” Jonathan Nez, Navajo Nation president, told Fox News. “We started in January and February, going door to door, letting our Navajo people know to follow the CDC criteria and what's coming out from the World Health Organization [WHO]. You know, washing your hands with soap and water, social distancing large crowds and I think are health care professionals, our citizens heeded the warnings, but it's snuck in.”
Tribal leaders say the biggest problem is the inability to test members and isolate those who may have contracted the virus.

“If you're trying to fight a fight without any weapons, without any armor, what are your chances for a disease that is formidable?” Bohlen said.

In the latest CARES Act passed by Congress, the Indian Health Service was allocated just over $1 billion in funding, which includes, in addition, $64 million specifically for coronavirus testing. The U.S. Department of Health and Human Services (HHS) also provided $70 million, which Indian Health Service Principal Deputy Director Rear Adm. Michael D. Weahkee said has been “pushed out to all of our tribal and federal sites throughout the country.”
“We've been able to articulate our needs directly to the task force. We have been very much the recipients of some goodwill, both within HHS and FEMA [Federal Emergency Management Agency],” Weahkee told Fox News. “There are also private donors who provided a lot of supplies to tribes.”

However, not all tribal leaders share the same sentiment, rather, they feel they have been overlooked, and in some cases, tribes aren’t seeing the funding reach their communities.

“You know, we're always a second thought, you know, and again, we're the First Nations people, we should be the first at the table,” Torres told Fox News. “But again, I would never put us before any other American that's struggling or even needing services. There has to be parity, there have to be equitable services, you know, offered to everybody, such as supplies, anything that's coming out.”
Navajo Nation President Jonathan Nez told Fox News the handling of the coronavirus in regard to native communities is another example of the federal government’s failure to honor treaty obligations and the nation-to-nation relationship.

“There are three legislations that were approved by Congress and signed into law by the president of the United States, and the last one was two trillion dollars. We are still awaiting that direct resource coming into the Navajo Nation … while states and municipalities have had that direct funding go through their public safety personnel, their healthcare professionals,” Nez said, adding that the Navajo Nation has to go through a series of hoops and criteria to get the funds.

“There's just been a history of broken promises from the federal government. But we're not going to cry over spilled milk, as they say. We're going to continue to do what we need to do to protect our Navajo citizens,” Nez added.

Rodney Mike, Duckwater Shoshone Tribe chairman, told Fox News they don’t have any test kits and if something were to happen, the nearest hospital is 75 miles away.

“We’ve been trying to find out where to get them and how to get them and the answer we get is there is a shortage of them,” Mike said. “Maybe because we’re so rural we’re out of sight out of mind.”

Mike said they have restricted access to the reservation to essential personnel, and “being remote is probably a good thing at the moment.”
Torres said she was told during a conference call with the Inter-Tribal Council that Nevada had received a supply of testing kits, but said they never made it down to the tribe.

“Imagine our disbelief, like what just happened here? So again, there’s supposed to be a government to government relationship there and I think that you know, even though the state of Nevada has worked well with us, it continues to be a barrier to have to go through that process,” Torres said.

The lack of testing and not being able to identify whether someone has been infected and is asymptotic poses a huge threat to these tight-knight communities, Gonzalez said.

“It's very worrisome to think, you know because it's such a small, closed community. Once it gets in, though, I think the potential for it to rapidly infect population-wise is incredibly high,” she added.
In addition to not having testing kits and personal protective equipment (PPE), American Indian health care facilities are extremely outdated compared to nationwide standards.

“The average age of our facilities is 36 years. The average age in the health care industry is 10 to 11 years,” Weahkee said. “So that in itself comes with its own challenges, how to maintain aged facilities.”

Weahkee said they're “getting close to the tipping point” in certain hotspots but praised the support of the HHS and the federal government to manage the need for reallocating resources.
Weahkee acknowledged the limited supply of testing and protective equipment but offered some optimism, as the Indian Health Service had been selected as a recipient of the Abbott rapid testing kits that are being pushed out to rural sites.

American Indian and Alaska Native communities' history has been defined by overcoming challenges, including health crises like SARS, H1N1 and Small Pox -- and although COVID presents unique challenges, tribal nations will overcome just the same.