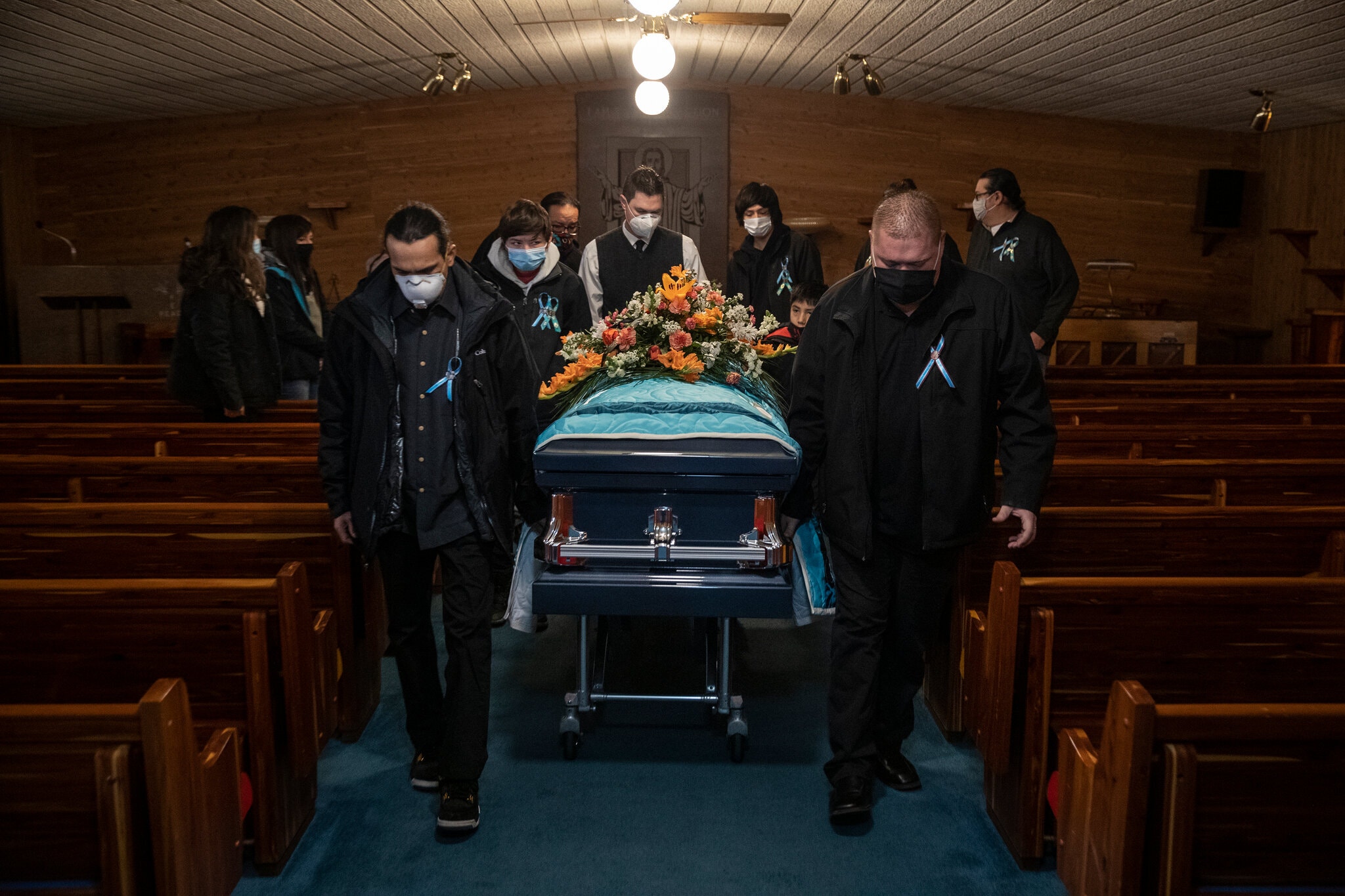 Pall bearers with the coffin of Jesse Taken Alive, a Lakota member of the Standing Rock Tribe, who died from Covid-19, at Kesling Funeral Home in Mobridge, S.D., last month.

STANDING ROCK RESERVATION, N.D. — The virus took Grandma Delores first, silencing an 86-year-old voice that rang with Lakota songs and stories. Then it came for Uncle Ralph, a stoic Vietnam veteran. And just after Christmas, two more elders of the Taken Alive family were buried on the frozen North Dakota prairie: Jesse and Cheryl, husband and wife, who died a month apart.

“It takes your breath away,” said Ira Taken Alive, the couple’s oldest son. “The amount of knowledge they held, and connection to our past.”

One by one, those connections are being severed as the coronavirus tears through ranks of Native American elders, inflicting an incalculable toll on bonds of language and tradition that flow from older generations to the young.

“It’s like we’re having a cultural book-burning,” said Jason Salsman, a spokesman for the Muscogee (Creek) Nation in eastern Oklahoma, whose grandparents contracted the virus but survived. “We’re losing a historical record, encyclopedias. One day soon, there won’t be anybody to pass this knowledge down.”

The loss of tribal elders has swelled into a cultural crisis as the pandemic has killed American Indians and Alaska Natives at nearly twice the rate of white people, deepening what critics call the deadly toll of a tattered health system and generations of harm and broken promises by the U.S. government.

The deaths of Muscogee elders strained the tribe’s burial program. They were grandparents and mikos, traditional leaders who knew how to prepare for annual green-corn ceremonies and how to stoke sacred fires their ancestors had carried to Oklahoma on the Trail of Tears. One tiny Methodist church on the reservation recently lost three cherished great-aunts who would sneak candy and smiles to restless children during Sunday services.

“We’ll never be able to get that back,” Mr. Salsman said.

Tribal nations and volunteer groups are now trying to protect their elders as a mission of cultural survival.

Navajo women started a campaign to deliver meals and sanitizer to high-desert trailers and remote homes without running water, where elders have been left stranded by quarantines and lockdowns of community centers. Some now post colored cardboard in their windows: green for “OK,” red for “Help.”

In western Montana, volunteers led by a grocery-store worker put together turkey dinners and hygiene packets to deliver to Blackfeet Nation elders. In Arizona, the White Mountain Apache sent out thermometers and pulse oximeters and taught young people to monitor their grandparents’ vital signs.

Across the country, tribes are now putting elders and fluent Indigenous language speakers at the head of the line for vaccinations. But the effort faces huge obstacles. Elders who live in remote locations often have no means to get to the clinics and hospitals where vaccinations are administered. And there is deep mistrust of the government in a generation that was subjected without consent to medical testing, shipped off to boarding schools and punished for speaking their own language in a decades-long campaign of forced assimilation.

Ira Taken Alive at the burial of his parents. “It takes your breath away,” he said. “The amount of knowledge they held, and connection to our past.”

About a year into the pandemic, activists say there is still is no reliable death toll of Native elders. They say their deaths are overlooked or miscounted, especially off reservations and in urban areas, where some 70 percent of Indigenous people live.

Adding to the problem, tribal health officials say their sickest members can essentially vanish once they are transferred out of small reservation health systems to larger hospitals with intensive-care units.

“We don’t know what happens to them until we see a funeral announcement,” said Abigail Echo-Hawk, director of the Urban Indian Health Institute.

The virus claimed fluent Choctaw speakers and dressmakers from the Mississippi Band of Choctaw Indians. It took a Tulalip family matriarch in Washington State, then her sister and brother-in-law. It killed a former chairman of the Yocha Dehe Wintun Nation in California who spent decades fighting to preserve Native arts and culture. It has killed members of the American Indian Movement, a group founded in 1968 that became the country’s most radical and prominent civil rights organization for American Indian rights.

On the Navajo Nation, where 565 of the reservation’s 869 deaths are among people 60 and older, the pandemic has devastated the ranks of hataałii, traditional medicine men and women.

When the virus exploded across the Navajo Nation, traditional healers who use prayer, songs and herbs as treatments tried to protect themselves with masks and gloves. They wrapped ceremonial objects in plastic. They set hand sanitizer outside traditional hogan dwellings.

But people came, seeking help with their grief or prayers for ailing relatives. And the healers got sick.

Now, remote meetings of the Diné Hataałii Association, a group of Navajo medicine men and women, include updates on who has died, members said. The roster of loss now includes Avery Denny’s 75-year-old grandfather and 78-year-old aunt, who both died of the virus.

“When they pass on, all that knowledge is gone forever, never to be retained,” said Mr. Denny, a member of the association and professor at Diné College. “It’s just lost.”

Cemeteries are filling up on the rolling plains of the Standing Rock Sioux in western North Dakota, where families like the Taken Alives have buried multiple grandparents, matriarchs and patriarchs. Standing Rock has recorded 24 deaths during the pandemic.

In 2016, the tribe’s fight to block an oil pipeline propelled Standing Rock to international fame, drawing thousands of activists to protest camps that sprawled along the Missouri River. This winter, Standing Rock’s families are waging a lonelier battle as the virus rages through crowded multigenerational homes where elders raise children and pass along their language — a crucial role that has made them incredibly vulnerable.

Diane Gates, 75, one of Standing Rock’s first elders to die of the virus, lived with multiple family members, relatives said. Her 75-year-old sister-in-law, Reva, who recently had open-heart surgery, also lives with several grandchildren in an isolated corner of the reservation. They see few visitors and have a lock on their gate, and they try to protect themselves with herbs and steam treatments. But there is always the risk of what a granddaughter could bring home from work.

Tribal health workers say they are also tired and overwhelmed, the strains of fighting Covid compounded by isolation, distance and a lack of resources.

The Standing Rock Sioux had to create their own contact-tracing team after tribal officials said governments in North Dakota and South Dakota failed to track the virus. Over the summer, bureaucratic conflicts scuttled an effort to set up a testing site on the southern end of the reservation, forcing people without cars to hitchhike or walk for miles to get swabbed. Those who do recover from the virus often find themselves stranded at hospitals hundreds of miles from the reservation, and have to call a tiny team of drivers to shuttle them home.

In October, as an outbreak of coronavirus swarmed across North Dakota, Rita Hunte, 66, woke one morning gasping for breath in her riverside community of Cannon Ball. She called her daughter and said: My girl, I don’t know what to do.

She spent two days in the 12-bed Indian Health Service hospital on the reservation, begging to be transferred out, her daughter, Marlo, said. She was taken to a hospital in Fargo where she lingered for weeks, mostly unconscious and on a breathing machine, as her daughter washed her hair and tried to move her arms and legs to reduce the swelling. She died on Nov. 29.

Ms. Hunte was one of just 290 people who still spoke fluent Dakota, and in her work with a tribal cancer program, she would often pray with patients before they traveled to Bismarck or the Mayo Clinic for treatment.

Since her death, her widower, Marlon, has been trying to stay busy with church services where he plays acoustic guitar and lays hands on people as they testify to the goodness of the Lord. But his daughter said that Mr. Hunte’s role as a respected elder has paradoxically isolated him even further. Some neighbors now keep their distance because they are uneasy about asking whether he is doing OK, Marlo Hunte said.

“I feel a little lost there every now and then,” Mr. Hunte said.

Many of the elders now perishing are dying after months of monastic precautions. When the pandemic first erupted, Jesse Taken Alive helped record public-service messages in Lakota urging fellow elders to protect themselves. He set up a computer in the tepee beside his home where he taught remote language classes.

But as the pandemic grew worse, requests from his community piled up: Help with funeral prayers. Help with a ceremony. He had been a tribal chairman, and he and his wife, Cheryl, had spent their lives trying to help people on Standing Rock, whether it was fighting for tribal land and sovereignty or addressing a rash of suicides.

“We tried our best to keep everyone away,” their daughter Nola Taken Alive said. “But my Dad had a hard time saying no when people needed him.”

The couple ended up on separate floors of the same hospital in Fargo. When Cheryl died in November, the fight began to fade in Jesse, said his son, Ira, who is also vice-chairman of the Standing Rock Sioux Tribe. Jesse Taken Alive died on Dec. 14. The family has been reflecting on the loss — Delores, the walking dictionary of Lakota linguistics. Ralph’s quiet dignity. Jesse and Cheryl’s deep faith and love for each other and their people.

“We’ll still be here,” Nola Taken Alive said. “But it’s going to be a struggle. How do I fill their shoes?”