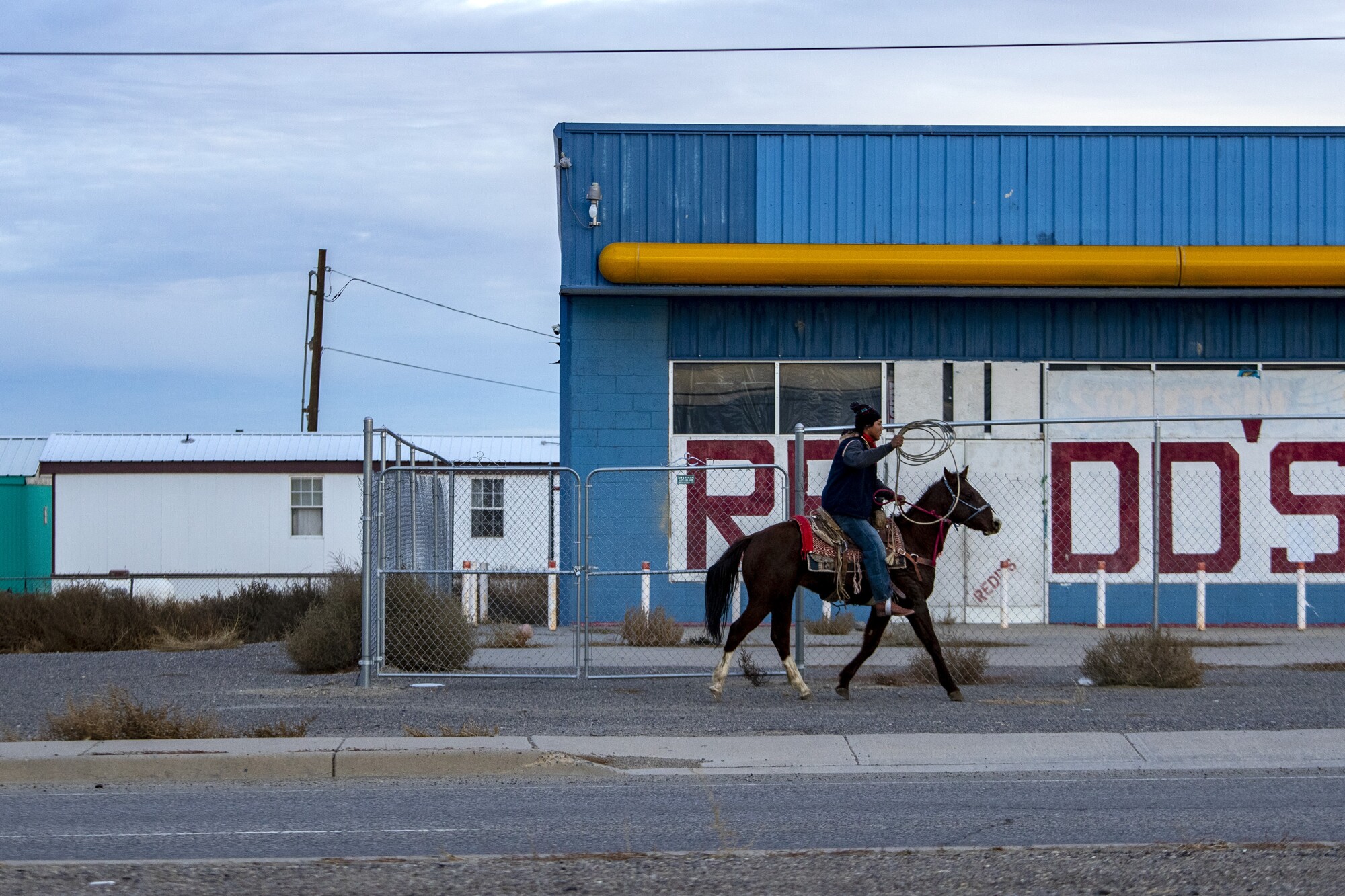 A man on a horse rides through a town on the Navajo Nation where coronavirus cases are surging to all-time highs. Native Americans nationwide are among the most high risk groups of catching the virus. (Brian van der Brug/Los Angeles Times)

TWO GREY HILLS, N.M. — The man on the other end of the speakerphone gasped and let out a thick, phlegm-clogged cough before responding to Marlene Montoya’s question.

“We got it, I think, on a quick trip to Albuquerque,” he said. “Me and my oldest boy are in bad shape.”

Montoya, a COVID-19 contact tracer here on the Navajo Nation in northwestern New Mexico, leaned close to the phone and spoke in a low, soothing tone to the man, who introduced himself as Freddie. Before long, she assured him that another Navajo Nation Department of Health worker would bring him a cardboard box packed with canned food, fresh produce and water.

“Please,” she told the man in his early 50s, who lives in a desolate area of the sprawling reservation, “just stay home. We need you to stay put and monitor your symptoms.”

As the COVID-19 pandemic enters its 10th month, and infection rates spike across the country to levels that have begun to overwhelm hospitals, the situation remains especially dire on the Navajo Nation, the largest reservation in the U.S., stretching across high desert plateaus of Arizona, Utah and New Mexico but served by only a handful of chronically underfunded hospitals.

More than a third of COVID-19 deaths in New Mexico are among Native Americans, who make up 11% of the state’s population. To date, 17,700 Navajo, out of nearly 175,000 who live on the reservation, have contracted the virus and nearly 700 on the reservation have died from complications. Navajo Nation government officials have said in recent days that intensive care unit beds are at 100% capacity.

The work of contact tracing here is especially difficult and tiresome because of the logistical challenges.

Montoya and others spend hours on the telephone trying to track down people who live off remote gravel roads where cellphone service can be patchy. Some Navajo do not have cellphones and house visits require hours of driving and heighten the risk of catching the virus.

To help stanch outbreaks in remote parts of the reservation, officials instituted a three-week stay-at-home order that was due to expire this week but has now been extended through late December. Navajo Nation President Jonathan Nez said he’s preparing to send a request for a major disaster declaration to the federal government.

The reservation’s seven-day average is 194 cases, according to the Navajo Nation Department of Health, among the highest it’s ever been since the pandemic began, and long lines of people waiting to get tested for the coronavirus snake around the reservation’s four inpatient hospitals.
With hospital units at capacity on the reservation and at larger intensive care facilities in neighboring towns, those like Freddie — sick, but able to manage their care at home — are being asked to stay put unless their symptoms escalate.

During the summer, that meant sleeping in tents outside cramped houses, so as not to risk infecting relatives or having to drive hundreds of miles to isolate at care facilities.

But now that the temperature dips below freezing most nights, some infected residents are being housed in nearby motels.

Working out the arrangements are among the duties of the 250 contact tracers on the reservation. Besides monitoring the spread of the contagion — tracking down people who test positive, finding out whom they’ve been in contact with and then telling those people to get tested — Montoya spends a lot of her time comforting people and overseeing housing demands.

“It’s a mix of education and counseling,” Montoya said. “People get sick, they’re scared and looking for us to give them answers.”

Native Americans are 3.5 times more likely to contract coronavirus than white people, according to the Centers for Disease Control and Prevention, due in large part to high rates of underlying health conditions, poor housing conditions and limited resources stemming from a lack of economic investment in tribal communities.

Many here do not have reliable electricity, phone service or running water, making it difficult to track and limit the spread of the virus in this picturesque land of sandstone buttes and juniper-filled valleys.

“Contact tracers are some of the most essential frontline workers we have,” said Nez. “The work is endless.”

Before the pandemic, Montoya, who works for the Navajo Nation Department of Health, spent much of her time focused on projects aimed at lowering diabetes rates on the reservation. High rates of chronic kidney ailments and cancers have, for years, plagued the reservation, side effects from uranium mining in the area. All are high risk factors that increase the likelihood of death from the virus.

“Working in healthcare can be a challenge here,” she said.

Montoya, who lives along a dirt switchback 15 miles from here in Newcomb, N.M., began focusing on contact tracing in April. These days, for almost 10 hours per shift, she dials the latest group of Navajo who tested positive for the virus — 22,000 in total on the reservation and in bordering towns since March — and ticks off the same series of questions.

When did you start feeling symptoms?
Who have you spent time with since then?
Do you have a contact number for those people?

Between questions, she offers reassurances and assistance. Then she turns to logistics.

What mile marker is the house located at?
What color car is parked outside?
Do you have dogs?

On a recent afternoon, Montoya sat inside a cluttered office with her colleague, Marsandra Tsosie. The women made calls and filled out paperwork, then dispatched colleagues with food for the infirm. The conversations shifted seamlessly between English and Diné, the language of Navajo, and often times patients called back several times to follow up.

“People just want to talk,” Montoya said, “they want to not be alone.”

“There’s loneliness,” she said, staring down at a notebook filled with names of people who had tested positive.

Residents like Freddie, who sought privacy as he battles COVID-19, rely on family for support. But when self-isolation is required, solitude can envelop a person.

Once, a man asked Montoya if she’d like to go out on a date once he was feeling better. “I told him I’m old enough to be his grandma,” she said and laughed — a brief moment of much-needed levity for the women, who have both lost relatives and friends to the virus.

Montoya, whose daughter had a son in October, has yet to meet her new grandchild because of limitations on social gatherings.

“Only virtually,” she said. “FaceTime has been good.”

She’s spent months away from her mother, who lives alone several hours away. Tsosie says her mother has stayed busy raising livestock, but she can tell her mother is lonely and the isolation of the pandemic is wearing on her.

“When I talk to people, especially older women, I think of my mom,” she said. “I can hear her voice in them … this pandemic is affecting our loved ones, our neighbors, our friends. ”

In this close-knit culture, Montoya and Tsosie have done contact tracing regarding patients they know personally.

“Your neighbors might be miles away,” Tsosie said, “but we all know each other … we are a family.”

Signs and graffiti reading “Stay Home” and “Keep Diné Alive, Do Your Part” implore people to hunker down. Many hope to see the local government impose its stay-at-home order through New Year’s.

On a recent afternoon, Montoya finished a call with a woman who had been diagnosed earlier that day. The woman lived in a single-level home outside of Shiprock, N.M., with her two boys — all three were ill.

Woody loaded up her Dodge Ram and went to a local food pantry, where volunteers packed her truck with rice, canned vegetables and water.

She barreled down a two-lane highway, as she does several times most days. Arriving at the house, Woody began unloading the supplies onto a red picnic bench in the front yard, and the resident came to the door in a mask and offered a short wave.

“You should be OK on food for several weeks,” Woody said. “Feel better and let us know if you need anything.”

An American flag flapped from atop a pole near the table. Woody hopped back into her truck, headed to yet another delivery.