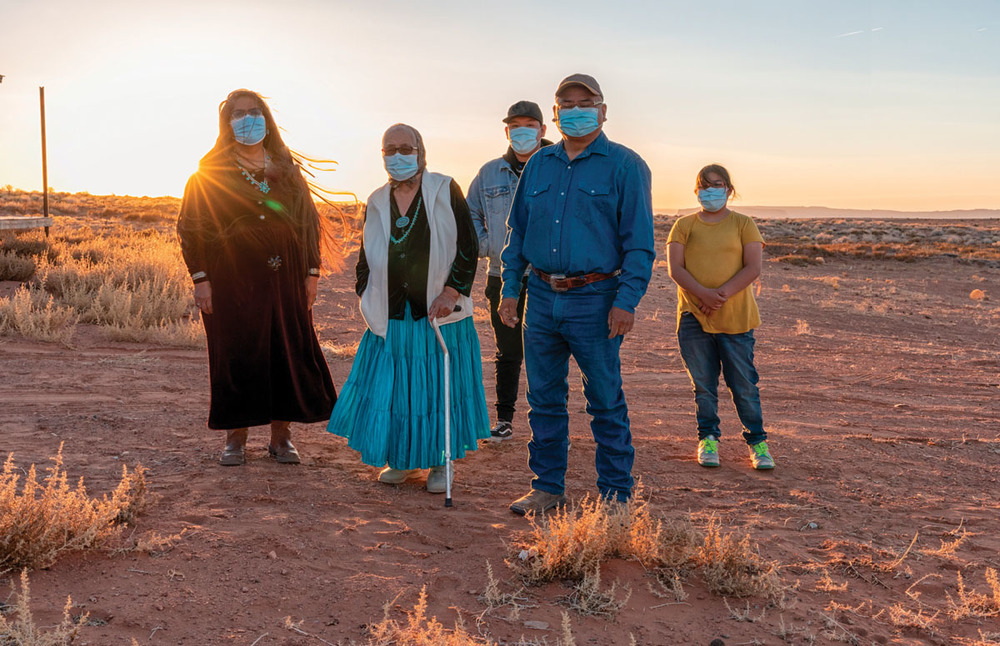 BY SUSAN I. EASTMAN

The pandemic severely affected the Navajo Nation largely due to factors related to housing and infrastructure. About 30 percent of the population of the Navajo Nation does not have running water in their homes.  And it is common for multiple generations of a Navajo family to share one small house, making it impossible to practice social distancing at home.

The region known as the “Former Bennett Freeze Area (“FBFA”) of the Navajo reservation was more adversely affected by the pandemic due to the moratorium on development and construction in the region. Administratively imposed by Bureau of Indian Affairs (“BIA”) Commissioner Robert Bennett in 1966 to urge the Hopi Tribe and Navajo Nation to resolve a land dispute that was not settled until 2006, the FBFA affected nine Chapters and 1.5 million acres of Navajo land. The construction and development ban included “fixing roofs, building houses, constructing gas and water lines, and repairing roads.”

Pre-pandemic, FBFA residents already were dealing with decades of deprivation of the basic necessities of American life: indoor plumbing and running water, electricity, and access to roads from homes for manageable distances to critical health care centers and shopping. To understand the current circumstances of FBFA, it is essential to learn the history of the longstanding land dispute between the Navajo Nation and the neighboring Hopi Tribe. As FBFA rehabilitation plan developers observed, “The COVID-19 pandemic didn’t create the crisis, it simply revealed it.”

The Treaty of 1868 established the Navajo Nation’s land base and formally ended hostilities between the federal government and the Navajos. Allowing the Navajos to return to their homeland in northwestern New Mexico and northeastern Arizona, the reservation was expanded by executive order in the late 19th and 20th centuries multiple times until 1934. (See Figure 1 map on page 24.)

In December 1882, President Chester Arthur established 2.5 million acres via Executive Order Reservation primarily for the Hopi Tribe. Within the 1882 reservation, there lived about 300 Navajos.

The Act of 1934 formally established the boundaries of the Navajo reservation “for the benefit of the Navajo and such other Indians as may already be located thereon,” west of the 1882 Executive Order Reservation. The 1934 Act formally recognized prior executive order reservations. The western area of the 1934 Reservation was the area that was later to become the FBFA, and rights to this area became disputed by the Navajo Nation and Hopi Tribe. Most of the residents of the FBFA were Navajos, with some Hopis living in the village of Moenkopi. The Hopi Tribe also had areas within the FBFA they used for religious purposes.

In 1966 the BIA required both tribes to consent to any development in the disputed land (see Figure 2 on page 26). In 1972, the Department of Interior exempted Moenkopi and Tuba City from the mutual consent requirement. In 1976, the DOI created an appellate process for projects when the other tribe refused to give consent.

Enacted in December 1974, the Navajo–Hopi Settlement Act (“NHSA”) sought to resolve the land dispute between the two tribes regarding the 1882 Executive Order reservation, and it appointed a federal mediator to assist with settlement. Failing resolution, the NHSA authorized the partition of the Joint Use Area within the 1882 Reservation, and the relocation of tribal members who were living on land partitioned to the other tribe.

Within the FBFA, the 1974 statute authorized either tribe to file suit in the District Court of Arizona to determine the interests in the land. Lands the court determined that the Navajo Nation had exclusive interest would continue to be part of the Navajo reservation; lands the court determined that the Hopi Tribe had an exclusive interest “shall be part of the Hopi reservation.” Lands that the court found that each tribe had a joint or undivided interest would be partitioned by the court “on the basis of fairness and equity” and either retained or added to each tribe’s reservation.

Congress codified the FBFA in 1980 when it amended the NHSA.

Specifically, Congress restricted any development of “lands in litigation.” “Development” included any new construction or improvement to the property, public work projects, power and water lines, public agency improvements, and rights of way. After this amendment, the Hopi Tribe placed a moratorium “on all further Navajo construction activities” in the FBFA. In 1988 Congress amended the NHSA again to address complaints by FBFA residents that the Hopi Tribe denied or refused to respond to any requests for improvements or repairs. Each tribe had 30 days to respond to a request from the other tribe, and if the tribe failed to respond within 30 days or refused consent, the tribe making the request for the improvement could appeal to the Secretary of Interior.

The Hopi Tribe sued the Navajo Nation seeking to quiet title to lands established as a statutory reservation by the 1934 Act. The Ninth Circuit rejected the Hopi Tribe’s claims, including their claim that the 1934 Act and legislative history showed that Congress intended to give the Hopi Tribe “entitlement to a one-half interest in the reservation.”

In Masayesva v. Zah, Judge Earl Carroll partitioned the 1934 Act Reservation between the Navajo and Hopi Tribes, which was upheld by the Ninth Circuit. At issue was what Congress meant by the term “located” in the 1934 Act that referred to “such other Indians as may already be located thereon.” The Circuit acknowledged that the Hopi Tribe obtained title to “pockets occupied” within the 1934 Reservation, and that the 1934 Act intended “to protect the Hopis’ rights to areas outside the 1882 reservation,” and reversed the district court’s ruling on that issue. The Circuit remanded back to the court to “award identifiable locations regularly and exclusively used for religious observances or activities by the Hopis to that tribe.” The Circuit deferred to the discretion of the court to “allocate a reasonable amount of land around the shrine or regular use area to provide for its appropriate use and maintenance.” The Circuit further held that lands regularly used by both tribes were subject to partition “on the basis of fairness and equity.” [quoting from the 1974 act].

Honyoama v. Shirley finally ended the FBFA litigation and began the mediation process resulting in the Intergovernmental Compact (“Compact”) between the Navajo Nation and Hopi Tribe that was incorporated into the court’s order and final judgment. The case also judicially lifted the FBFA.

The court acknowledged the 1992 final judgment between the Navajo and Hopi Tribes from Masayesva v. Zah, which partitioned the FBFA between the two tribes.

The final order also quieted title and settled the claims to the lands within the 1934 Act Reservation between the tribes. The court retained jurisdiction to enforce the Compact, which provided the tribes the power to grant “rights of access and use, easements and other interests” to the other tribe in the FBFA for religious purposes. Protection was provided for each tribe’s religious sites by restricting construction of habitable structures near sensitive or confidential areas identified in sealed exhibits. The tribes waived any future claims and each tribe “shall be deemed to have consented … to any and all future ‘development’ … within the lands of the other party covered by that statute.”

Congress recognized in 1980 that past federal actions resulted in conditions that had not changed in the FBFA since 1966. Nearly 10,000 Navajos lived in the FBFA in 1980. By 2000, the population grew to about 20,000 residents. But “only 24% of the houses in the area are habitable, almost 60% don’t have electricity, and the majority do not have access to potable running water.”

In 2008, the Navajo Nation engaged WHPacific, Inc. (“WHPacific”) to study and recommend a plan for the region’s rehabilitation. The company created a “Regional Recovery Plan” for the FBFA between May and September 2008. WHPacific’s assessment of the FBFA revealed that FBFA residents were “disproportionately impacted by the freeze, even more so than the chapters as a whole, which most residents can easily see.” WHPacific found that 24 percent of homes were in “very poor” condition; 38 percent were in “poor” condition, and 26 percent were in “fair” condition. Only 23 percent of homes in the FBFA met the “habitable” standard—a situation that had actually became slightly worse as of December 2020.

WHPacific’s survey revealed that about 10 percent of FBFA residents “make almost daily round trips to haul water from a safe source. Some homes are as many as 24 miles away.” And 27.5 percent of occupied homes on the FBFA “are located more than three miles from an existing water line, which is the point at which they become ineligible for Indian Health Services assistance for water hook-up.” Regarding electricity, WHPacific estimated that “over 40 percent of residential structures were without electric power.” By December 2020, the number of FBFA homes without electricity had grown to nearly 60 percent.  WHPacific’s assessment of road conditions estimated that of all roads within the FBFA, 940 miles were in “very poor condition.” About 170 miles of these “very poor” roads are considered “major arterial or community roads” that provide community members with access to shopping, public safety and emergency medical response.

WHPacific’s recovery plan was not implemented until the present Navajo Nation administration led by President Jonathan Nez and Vice-President Myron Lizer. The administration made rehabilitation of the FBFA a high priority before the pandemic’s onset. The Navajo Nation hired Native Builders, LLC to develop and launch what is called the “Navajo Thaw” implementation plan, which builds on WHPacific’s recommendations. Propelled by the pandemic, the Navajo Thaw contractors developed a regional recovery plan, and each of the FBFA chapters developed or are developing their own recovery plans.

The federal Coronavirus Aid, Relief, and Economic Security Act (“CARES Act”) of 2020 provided the Navajo Nation with funding to respond to the COVID-19 pandemic. Within the FBFA was the crucial need for water infrastructure. But the original December 30, 2020 deadline in the CARES Act provided a very short time frame to use the funds for infrastructure projects.

With only 22 days, one CARES Act fund recipient, Tolani Lake Enterprises (“TLE”), a non-profit organization, implemented the Navajo Thaw plan for FBFA chapters for community-based water and food security projects. From the date of execution of their grant and contract on December 8 to December 30, 2020, TLE accomplished the following: submitted survey request applications and completed archaeological surveys for six well sites; drilled five monitor and production wells; sampled and analyzed water for safe drinking water standards; distributed 232 water filters to 31 communities; purchased five new water delivery trucks; delivered water to 40 families in five communities, and employed 70 people.  The recent enactment of the American Rescue Plan provides the Navajo Nation with another opportunity, and significantly more funding and time, to fund critical water and other infrastructure projects that can achieve significant progress toward the recovery of the FBFA.