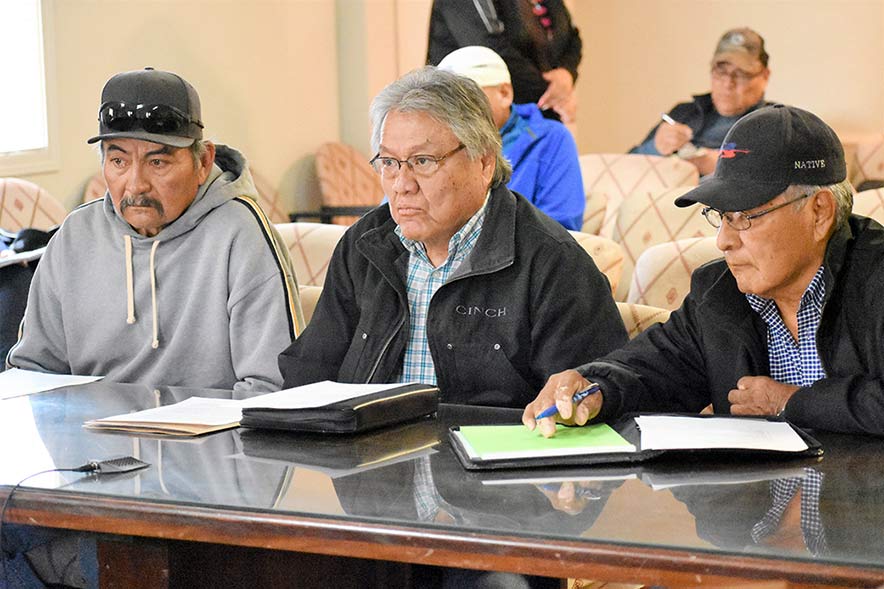 While detrimental impacts and trauma caused by the 1974 Navajo-Hopi Land Settlement Act live on through relocated families, the proposed fiscal 2021 federal budget reduction to $4 million for the U.S. Office of Navajo and Hopi Indian Relocation signals the U.S. government is edging toward closing it.

The reductions are largely due to the office’s position that it will have only a few more relocation homes to build, repair or replace, appeals to address, and that its mission is just about complete.

Additionally, $1 million of the office’s 2019 budget was earmarked for an audit, expected to be completed by June 2020, which also indicates a move toward “wrapping things up” for the office.

“It’s fair to say the audit activities are related to an effort to conclude our work and a transition from a separate agency into whatever remains to be done being handled by existing parts of the federal government,” said the office’s legal director, Larry Ruzow, on Monday.

This is in opposition to the position of the Navajo-Hopi Land Commission that passed a resolution last summer stating the office “shall not terminate until all the duties and responsibilities in the act are completed, including all unfulfilled obligations to relocatees.”

This position was adopted by the Naabik’iyati Committee last fall and affirmed opposition to the office’s closure.

“OHNIR’s job is not done,” said commission Chairman Otto Tso. “We have to make sure we hold the federal government responsible.”

The proposed budget reduction also conflicts with testimony Tso made Feb. 12 to Congress, where he advocated for the continuation of funding for ONHIR “to fulfill basic infrastructure promises made to relocation communities,” reauthorizing the Navajo Rehabilitation Trust Fund and providing $20 million for critical needs in the Former Bennett Freeze Area, among other things.

“We don’t want OHNIR to close,” Tso told members of the House Appropriations Committee. “We want the funding to continue. We want to make to make sure that Congress and the United States fulfill their obligations. We are at a critical juncture where the United States can live up to its word to Navajo families.”

‘No place to call home’

In the past year, the commission began conducting meetings in the impacted Navajo communities of its nine delegate members to identify issues, concerns and outstanding needs.

Tso says he’s concerned about the ongoing health and mental health impacts, especially on the elders and the children and grandchildren of those who qualified for homes who are not eligible for relocation benefits as they become adults.

“That created homelessness for three to four generations and it continues,” said Tso. “These families cannot go back and have no place to call home.”

Per a December 2017 Government Accountability report, ONHIR relocated 3,660 Navajo and 27 Hopi qualified families off of disputed lands that were partitioned, and provided houses for the heads of household but made no provisions for the children.

An estimated 16,000 Diné have been relocated since the 1974 act was implemented.

While Bavasi has stated as early as last March that the office will continue to operate as long at it is funded, attorney Larry Ruzow stressed that ONHIR was never intended to be a permanent organization so closure is inevitable.

“In terms of the relocation aspect of our work, that is wrapping up as we would expect,” said Ruzow. “There may be a few loose ends that whatever agency takes over when we close will have to deal with, but it’s going to be a relatively small amount of work.”

The continuing obligation will also be for the lands pursuant to the act such as Nahata Dziil Commission Governance Chapter, Ruzow added.
Bavasi stated that ONHIR may address other activities such as “applicant appeals, use of land and property, building leases and permits, and operation of the Padres Mesa Demonstration Ranch” in future reports.

The 1974 Settlement Act says that ONHIR will cease to exist when the president of the United States determines that its functions have been fully discharged, and Congressional authorization will have to be legislated for agencies to take on ONHIR’s remaining duties.

Bavasi stated two factors the decision makers would have to consider in finally closing OHNHIR are: “disagreement over whether ONHIR is responsible for infrastructure for relocatees and legislative requirements for transfer of ONHIR responsibilities.”

In the report Bavasi mentions that the “Naabik’iyati Committee estimated about $227 million in (relocation-related) infrastructure remains to be addressed for roads, power, water, telephone lines, livestock/economic development, etc.”

The heart of the matter

At the heart of the matter is a fundamental disagreement between the Navajo Nation and the U.S. government over commitments that were made to relocatees when they first agreed to move off of their ancestral lands.

The 1974 Settlement Act stated, “Any such division of the lands of the joint use area must be undertaken in conjunction with a thorough and generous relocation program to minimize the adverse social, economic, and cultural impacts of relocation on affected tribal members …”

Many would argue this has hardly been the case.

Furthermore, in Section 13 of the act (PL 93-531), Congress ordered the preparation and submission of a relocation report and plan.

Among the list of directives, the report and plan were to “take into account the adverse social, economic, cultural, and other impacts of relocation on persons involved in such relocation and be developed to avoid or minimize, to the extent possible, such impacts;” and “assure that housing and related community facilities and services, such as water, sewers, roads, schools, and health facilities, for such households shall be available at their relocation sites.”

Unfortunately, these sections of the act were quietly removed through amendments in 1988 and left relocatees in a no man’s land without the inducements they had been promised.

The Navajo Nation position points to this language in the original 1974 Settlement Act as an obligation that still needs to be addressed by OHNIR as “statutorily mandated” and as part of the promises made to the Navajo people in their agreements to relocate.

Meanwhile ONHIR believes that it has fulfilled the duties it was legislatively tasked with by providing relocation benefits to all individuals who were found eligible, and that other services such as infrastructure needs should be provided by another agency.

Bavasi notes that the GAO reported in 2018 that it is not within ONHIR’s statutory responsibility to provide infrastructure.

“Our director, Chris Bavasi, agrees that there are many unmet needs through Navajo country and the former Joint Use Area, NPL, and the former Bennett Freeze area,” said Ruzow.

“There isn’t any question that there are unmet infrastructure needs but that is not to say that our agency has to remain in existence to fulfill those,” said Ruzow. “There are certainly other agencies that do that in Indian Country generally and on the Navajo Nation in particular.”
The initial plan for ONHIR in 1981 was to implement the relocation program in an estimated five years at cost of $41 million to relocate 1,100 households.

Today, the program, in its 38th (fiscal) year, has spent over $598 million, with over half of that going to relocation housing and incentive payments and 30 percent to operation of the office, per Bavasi’s report.

NHLC Chairman Otto Tso says the Navajo Nation cannot support closure without a plan that lives up to the promises that were made.

He expressed a deep concern over the lack of communication and consultation between the federal government and the Navajo Nation regarding closing ONHIR.

Tso says the Nation hasn’t received word of an official stance on OHNIR’s status from the U.S. executive branch.

“The president (Donald Trump) is in full control of making sure that OHNIR’s responsibilities in the acts are met,” said Tso. “He is the sole authority.”

Through the act, the U.S. is obligated to notify the Navajo Nation and consult on a government-to-government basis, said Tso.

Another piece of legislation initiated by the NHLC and adopted through Naabik’iyati’ requests President Donald Trump to appoint a commissioner to oversee the work of OHNIR and ensure all federal promises are kept.

Tso explained that OHNIR has operated for 25 years without a commissioner, which was a requirement for establishing the office. As executive director, Bavasi has been serving as the delegated head.

Tso said he recognizes that there is an ongoing need for continuing education about the issues both for Congress and the executive branch.

Tso says the three NHLC resolutions adopted by Naabik’íyáti’ now provide a solid position from the governing body of the Navajo Nation that can be taken back to Washington, D.C.

“For the Former Bennett Freeze Area to recover and redevelop, there must be a sustained reconstruction program,” said Tso in his testimony to Congress. “Critical needs include housing, safe drinking water, electricity, timely emergency response services, telecommunications infrastructure, and community facilities.”

Tso says the NHLC is also proposing OHNIR expand, not shrink, its duties to help with the rehabilitation of the freeze area because those responsibilities were once included in the 1974 Settlement Act, but were subsequently removed after the freeze was repealed in 2009 without any funding attached.

“Since they’re not done with their mission on the relocation, why don’t we expand their scope of work to include the rehabilitation of the Former Bennett Freeze Area,” suggested Tso.

Through the leadership meetings in the areas impacted by relocation and the Bennett Freeze, Tso says the NHLC has been trying to get a clear sense of outstanding needs.

The NHLC also wants to assess how much money is flowing from the Navajo Nation general fund to the local communities through programs.

“The dollars don’t really trickle down to the local level,” said Tso. “It stays here in Window Rock, or somewhere. That bottleneck is there. That is the reason why I started to say, ‘Hey, how is Economic Development or Community Development impacting the former Bennett Freeze or planning in NPL?’”

The “Navajo dollar” is something that the Navajo Nation Council has control over, Tso said.

He cites the Navajo Thaw initiative of the NHLC, the NHLC Office, and the president’s office, which is in the process of assessing the needs and associated costs of rehabilitating the freeze area.

“That study and proposal is required by Congress to establish what is needed to rehabilitate the region,” he said. “That will allow leadership to take it to Washington and say this is what we need.”

Tso says he wants to move forward with the same concept for NPL, although funds will have to be secured to conduct a similar study there.

“We need to get that price tag because that was embedded responsibility of federal government as part of Section 13, relating to infrastructure, education and health care, requirements that OHNIR had to fulfill,” said Tso.

“The government was responsible but took the easy way out,” said Tso. “They took that portion out of the law and said ‘that’s not our responsibility anymore.’”