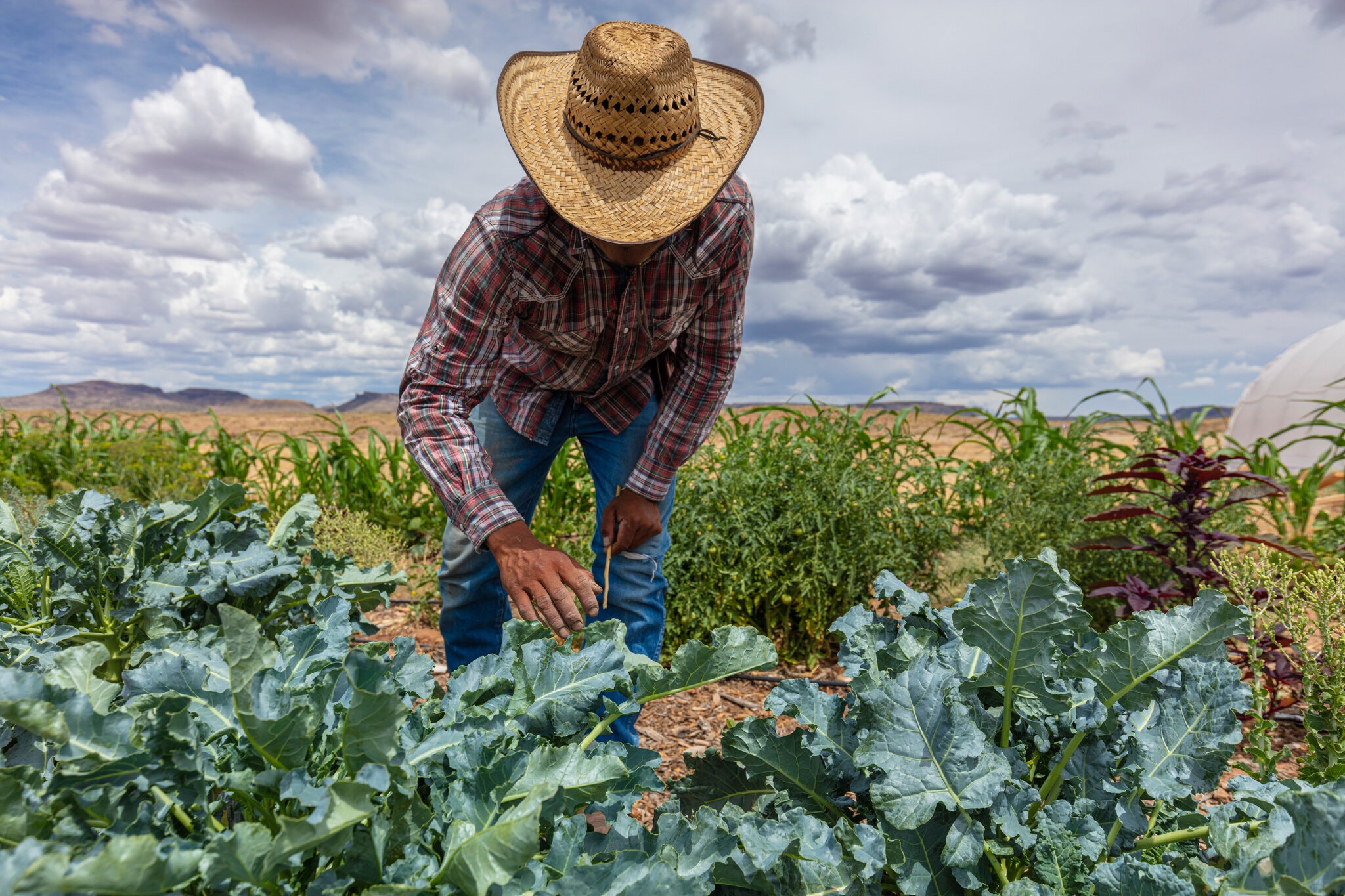 Artie Yazzie grows produce for his community in the Arizona section of the Navajo Nation. The determination of growers and gardeners like him keeps the food sovereignty movement alive.Credit...John Burcham for The New York Times

THE NAVAJO NATION — When Summer Brown lived in Phoenix, she had no problem finding fresh produce. If the Sprouts supermarket near her home didn’t have what she was looking for, she would just drive somewhere else.

This winter, Ms. Brown, an enrolled member of the Navajo Nation, moved back to her childhood home in Cornfields, Ariz., to start a small business as a leatherworker. Now, healthy food is harder to find for her two children, Paisley, 6, and Landon, 7. The entire Nation, which stretches 27,000 square miles across Arizona, New Mexico and Utah, has fewer than 15 grocery stores.

“The pickings are kind of slim here,” said Ms. Brown, 31. “It’s a lot of processed foods, and I try not to feed my family that.”

Even before the coronavirus pandemic dealt an exceptionally brutal blow to the Navajo — who call themselves the Diné, which means “the People” — Ms. Brown wanted to grow her own food. She spent last winter collecting seeds from Indigenous seed banks and researching Indigenous methods. Her small garden is already feeding her family, and she is looking forward to the fall harvest.

Her backyard garden isn’t meant just to replace a trip to the grocery store. Ms. Brown is part of a movement for food sovereignty, a global effort to give people control of their food supply and nutrition. It is a public health endeavor, an economic reclamation, an environmental protest and for many, a spiritual quest. Gardeners aim to grow healthy foods that are connected to their traditions, and to revive old methods of cultivation.

“I want to show the whole Navajo Nation, and even off the reservation, that you can live with the earth and you don’t have to rely so much on the outside to feed yourself,” Ms. Brown said. “We have all this land. We should be able to just go outside and get our food.”

The small gardens and cornfields rising across the Nation (which the Diné call the Dinétah) are attempts to correct legacies of historical wrongs. Once, the Diné were prosperous gardeners, hunters and stewards of the land. Then the United States government colonized the land and displaced the Diné in the mid-1800s, during what is now known as the Long Walk, to an internment camp at Fort Sumner, N.M. Livestock were killed off. Fields were trampled. And some orchards were lost forever.

Those and other attempts to divorce the Diné from their land and ancestral foodways have also left them vulnerable to the pandemic. Across the United States, Indigenous nations have suffered outbreaks that often appear to be more devastating than those in surrounding cities. But data gaps, population fluidity and under-testing make the scope of infections hard to quantify.

The Diné have weathered curfews and high rates of infection. The Nation is one of the hardest hit areas in the United States: 9,019 people have tested positive and 454 have died of Covid-19, as of July 30, according to the Navajo Department of Health.

Many households do not have running water, at a time when hand washing is critical. Many multigenerational families live together in compounds, which makes social distancing impossible. And for the Diné and many other Indigenous nations, the public health crises caused by food inequality are generations old.

“This virus has really shown how fragile and even unreliable the system really is, and how quickly everything can collapse,” said Nate Etsitty, 40, a food sovereignty advocate who has been helping Ms. Brown with her garden. “That’s what is driving more people to be partially more self-sustained.”

After seeing food shortages during the pandemic, many Diné have started gardens. Normally, they would work communally, but social distancing has required some innovations. This year, Mx. Etsitty (who uses gender-neutral pronouns and titles) has been helping first-time gardeners through the complex processes from afar. Other experienced gardeners, inundated with requests for help, are recording videos.

Felix Earle, 43, one of Mx. Etsitty’s closest friends, has been advising gardeners growing Indigenous seeds. In 2015, he found a handful of white corn kernels in a jar, 35 years after his grandmother hid them for safekeeping. He named the strain “Grandma Helen’s Corn.” Its kernels look like little white teeth, perfect and round.

This year, Mr. Earle, a fashion designer, planted his biggest crop ever. Across his property, stalks of corn are rising, almost 1,000 in all. He turned his discovery into a business, Red Earth Gardens, and gives kernels to interested members of the Nation. This year, for the first time, he ran out.

A global Indigenous food sovereignty movement began well before the pandemic. Some point to 2002 as a transitional moment, when representatives from Indigenous nations in 28 countries gathered at Lake Atitlán, in Panajachel, Guatemala, to write a declaration of the right to food.

“We know that food is medicine, but it can also make us more sick,” said Denisa Livingston, a leading Diné community health advocate and the Slow Food International Indigenous Councilor of the Global North. “It can contaminate our health and well-being.”

With limited sources of income to pay for the gasoline for long trips to faraway stores, families buy cheap bulk foods with a long shelf life, instead of fresh produce. Today, the Diné have high rates of diabetes, heart disease and obesity, conditions that pose a higher risk of complications or death from Covid-19.

Many Diné also receive federal food benefits. “You’ve got to stretch those funds, and the cheapest out there is junk food,” said Artie Yazzie, a community gardener, who grows produce for his neighbors.

“We have these big old thirst-busters that cost 60 cents, and three people can share it,” he added, using a popular term for soda. “So we’re going to go ahead and buy that instead of the $3 water or milk.”

Some programs are working to get fresh produce to Diné children. The Community Outreach and Patient Empowerment program, a nonprofit health partnership, provides vouchers for families with young children that are good for buying only fruits, vegetables and traditional foods. The amount, depending on family size, can go up to $35 a week.

But when children turn 5, they are usually no longer eligible for vouchers. Dr. Lydia Kim, a pediatrician with the Indian Health Services, sees the damage that unreliable access to food and water can wreak on her patients. Some who struggle with obesity drink five or six sodas a day.

With help from community partners, Dr. Kim started the Shiprock Area Food Access Coalition in 2018 to increase access to healthy food and water. She asked managers of a local grocery to move produce to the front of the store, so more shoppers might see and buy them. The managers told her their hands were tied, she said, because soft-drink companies owned the displays near the entrance. (The store manager did not respond to multiple texts seeking comment.)

Dr. Kim said she has seen many more sugary-drink displays in grocery stores in Shiprock, N.M., than in those outside the reservation. “There’s predatory targeting and a complete lack of choice.”

Ms. Livingston and members of the Diné Community Advocacy Alliance lobbied the Navajo Nation government to pass the Healthy Diné Nation Act of 2014. It lead to an elimination of a tax on healthy foods, while imposing a 2 percent tax on unhealthy foods, like soda.

The tax revenues help fund community wellness and food sovereignty projects like the Teesto Community Garden, in the Arizona section of the Nation. Last year, Mr. Yazzie, 39, the community gardener who oversaw the garden as a seasonal employee, would borrow the municipal pickup truck to fill an 1,800-gallon tank with water and irrigate the garden. In the summer, he goes through about 3,000 gallons each week.

For much of this year’s planting season, the truck was tied up delivering emergency provisions to families in need. But for Mr. Yazzie, planting was still a priority.

At first, he recruited his cousin to help fill a 300-gallon barrel each week. They contributed part of their federal stimulus checks to repair a 600-gallon water tank and trailer, burning through expensive gas as they drove back and forth.

Now Mr. Yazzie’s garden is flourishing. The grit and determination of growers and gardeners like him keeps the food sovereignty movement alive.

Every morning, Mr. Earle, the fashion designer, climbs a hill near his home and turns toward the sunrise to pray.

Mr. Earle started seeing reddened sunsets in January, which he and other spiritual leaders interpreted as a warning of what was to come. Long before coronavirus infection rates started climbing across the country, he started praying for protection.

Facing east as night becomes day, he thinks of his grandmother Helen Cornfields. In her old age, she would look out over the once-barren land.

“I wonder if we planted anything, if it would grow,” he said she once mused. Now, he has his answer.