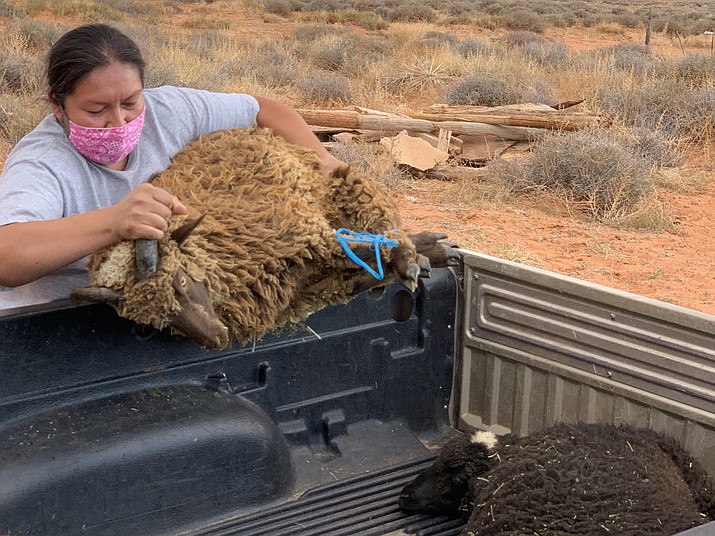 Unnamed woman loads sheep into the back of a truck as part of the Seeds and Sheep program on the Navajo Nation. The program, along with initiatives like Project Grow, the Indigenous Seed Keepers Network and Native Seed Network, are helping Native Americans grow their own food to build community and promote wellness. (Photo courtesy of Utah Diné Bikéyah)

PHOENIX — From a traditional hogan in a remote area on the Utah-Arizona line, Cynthia Wilson spent much of her spring sourcing drought-resistant seeds, packing them in small manila envelopes and labeling them to ship to families across the Four Corners.

Seeds for corn — white, blue and yellow. For squash. For melons. For many of the foods that long sustained her Navajo ancestors, before their land was carved into a reservation and the government started shipping in commodities. And long before the COVID-19 pandemic emptied grocery store shelves of necessities.

Wilson’s upbringing was immersed in Diné culture. Her grandfather was a medicine man, her mother an herbalist. Wilson is a nutritionist who directs the traditional foods program for Utah Diné Bikéyah, a nonprofit that promotes the healing of people and the Earth through conservation of tribal lands.

She grew up understanding the connection to food, its role in tradition and culture, ceremony and cures.

When COVID-19 began sweeping through the Navajo Nation, Wilson started Seeds and Sheep, an initiative that provides Navajos with sheep to raise and the means to start their own gardens.

The idea is to build self-reliance, fend off both food and economic insecurity, and help sustain the community until the pandemic eventually ends.

“Almost every day, it feels like there’s a GoFundMe page for funeral expenses of individuals within our community. It’s very disheartening,” Wilson said. “But in a larger context, I feel that the pandemic kind of opened up people’s eyes when it comes to sourcing food, that we can’t always depend on the grocery stores when something like this happens, that you should always go back to our self-sufficient lifestyle over the longer term.”

It is also giving rise to new efforts to address many deep-rooted disparities — and to Wilson and other grassroots champions who are leading efforts to help Native Americans persevere now and into the future.

When Seeds and Sheep launched in May, Wilson expected to help a hundred families at most. More than 300 families reached out, and she has since sent thousands of packets from her home in Monument Valley, Utah, to various parts of the Navajo Nation, which lies mostly in Arizona but stretches into southern Utah and western New Mexico.

To Wilson, the seeds represent a connection to culture, wellness, the Earth and family.

“We view food as a living, breathing being — no different than who we are,” she said. “To see the life of a seed sprout into produce, especially for the young people to see that and be involved in the teachings of that, is very encouraging.”

According to the Center for American Indian Health at Johns Hopkins University in Baltimore, food and water insecurity affect 25 to 40 percent of those living in rural tribal communities, and more than 80 percent of children rely on getting breakfast and lunch at schools, which have been closed during the pandemic.

There are just 13 grocery stores on the Navajo reservation, the largest in the U.S. at 27,000 square miles — bigger than West Virginia. Trips to buy food and necessities can take hours for some Navajos, and as COVID-19 caused a run on certain items, many ventured out but came home empty-handed.

Although the 174,000 people living on the reservation may not have easy access to grocery stores, Wilson noted they do have something crucial to food security: space. She believes using the land to create gardens will build a more food secure future — as COVID persists and beyond.

“Each home has a plot, at least an acre in space, where they are able to plant a cornfield,” she said. “And we know there’s all these cornfields … throughout the generations that need to be revitalized.”

Her seed distribution effort is meant to “encourage farmers, community members to get back to restoring their own food systems for their families,” she said.

The move to return to more traditional ways of eating started before COVID-19. Such initiatives as Project Grow, the Indigenous Seed Keepers Network and Native Seed Network all focus on the importance of growing food as a way to build community and promote wellness.

Traditionally, food in Indigenous communities was sourced directly from the land through hunting and gathering. This changed when the federal government relocated Native Americans to reservations and began commodities programs that distributed white flour, lard and other processed foods.

Health problems started to rise, and Native Americans now have among the highest rates of diabetes, obesity and high blood pressure in the United States.

Rafael Tapia Jr., vice president of programs at Partnership With Native Americans, said this arrangement not only altered food gathering practices but also led to misunderstandings about culturally significant foods. One example, he said, is fry bread — a dough fried in oil or lard that is a creation of the commodities era and not Indigenous culture.

Tapia’s organization works to decrease food insecurity in Native American communities with such programs as Project Grow, an initiative to till garden sites and provide seeds and other gardening supplies for residents of reservations in the Northern Plains.

“In Arizona alone, we’re dealing with 22 different tribes, and each one has their own stories, their own ancestry — and food is very much a part of that,” Tapia said.

Across Indian Country, the pandemic has prompted new efforts to increase food security.

In Oklahoma, some in the Ponca Nation have begun a community garden that includes 150-year-old corn varieties, and the tribe is growing its own traditional seeds in a greenhouse, said Casey Camp-Horinek, an elder, environmental ambassador and hereditary drum keeper.

“Our garden is going to be big enough not only to sustain our large family but also to sustain (those) who may not have the ability to go to stores,” she said during a recent virtual webinar about the impacts of COVID-19 in Indian Country.

Gardening has not only bridged a gap between food supply and demand, but also between tribal elders and the young, she said. She’s been teaching her own grandchildren the old ways, and “they’ve begun to plant the things they want to eat and learn how to grow them.”

“We as a family are going to dry our foods. We’re going to have everything in order through the winter and even into next spring that makes it sustainable for us,” she said. “As with everyone else, we’re going day by day right now to see what is the best for our people.”

Linda Black Elk, an ethnobotanist and the director of food sovereignty programs at United Tribes Technical College in Bismarck, North Dakota, said gardening can increase overall wellness outside of this pandemic.

“We are already predisposed to health conditions,” she said. “Diabetes, heart disease — all these health issues put us at higher risk of catching bad things that can come with complications and death.”

Tribes that plant more of their own food can improve the health of their citizens to help fight off COVID but also future illnesses.

“We are doing so much more than just planting a garden,” Black Elk said. “It brings us closer to our ancestors and each other, decreases food insecurity, increases health benefits as well as mental and spiritual.”

Elizabeth Hoover, an associate professor at the University of California, Berkeley, and an expert on native food systems, agreed the pandemic has caused a shift in thinking for many who now want to supply their own food to avoid being in a position of need in the future.

“We get things sent from all over the world,” Hoover said. “What happens if those shipments are disrupted?”

COVID-19’s impact on food security has not gone unnoticed in Washington. On July 17, the U.S. Department of Agriculture announced additional food for families via its Food Distribution Program on Indian Reservations (FDPIR) in response to difficulties brought on by the pandemic.

The program provides monthly food packages to Native Americans living on reservations or, in Oklahoma, approved areas near reservations as an alternative to the Supplemental Nutrition Assistance Program or SNAP, formerly known as food stamps. On average, 83,800 individuals participated monthly during fiscal 2019.

Some in Indian Country say even more action is needed.

The Native Farm Bill Coalition, a project of the Shakopee Mdewakanton Sioux Community’s Seeds of Native Health campaign, the Intertribal Agriculture Council, the National Congress of American Indians and the Indigenous Food and Agriculture Initiative, has called for Congress to provide more flexibility for SNAP, including temporarily waiving the prohibition on dual use of SNAP and FDPIR in the same month.

On the Navajo reservation, Wilson said, Seeds and Sheep is shifting its focus to sourcing sheep from local producers and preparing to distribute lambs in the fall. Sheep have long been a part of Diné culture, through various spiritual and wool weaving traditions.

“We’re planning to distribute Navajo-Churro lambs with the purpose of families restoring their flocks of sheep for the longer run,” she said.

Wilson said she’s been especially heartened to see how many young Navajos and others new to gardening or raising sheep have expressed interest in learning. It’s an encouraging sign in otherwise difficult times.

“A lot of our elders believe that we’ve disconnected from our traditional ways of life … and that disconnection, they believe, leads to the climate crisis that we are facing, because we were kind of pushed more into the Western ways of life,” she said.

Her efforts, she hopes, will serve to reconnect young and old — with Mother Earth, and one another.