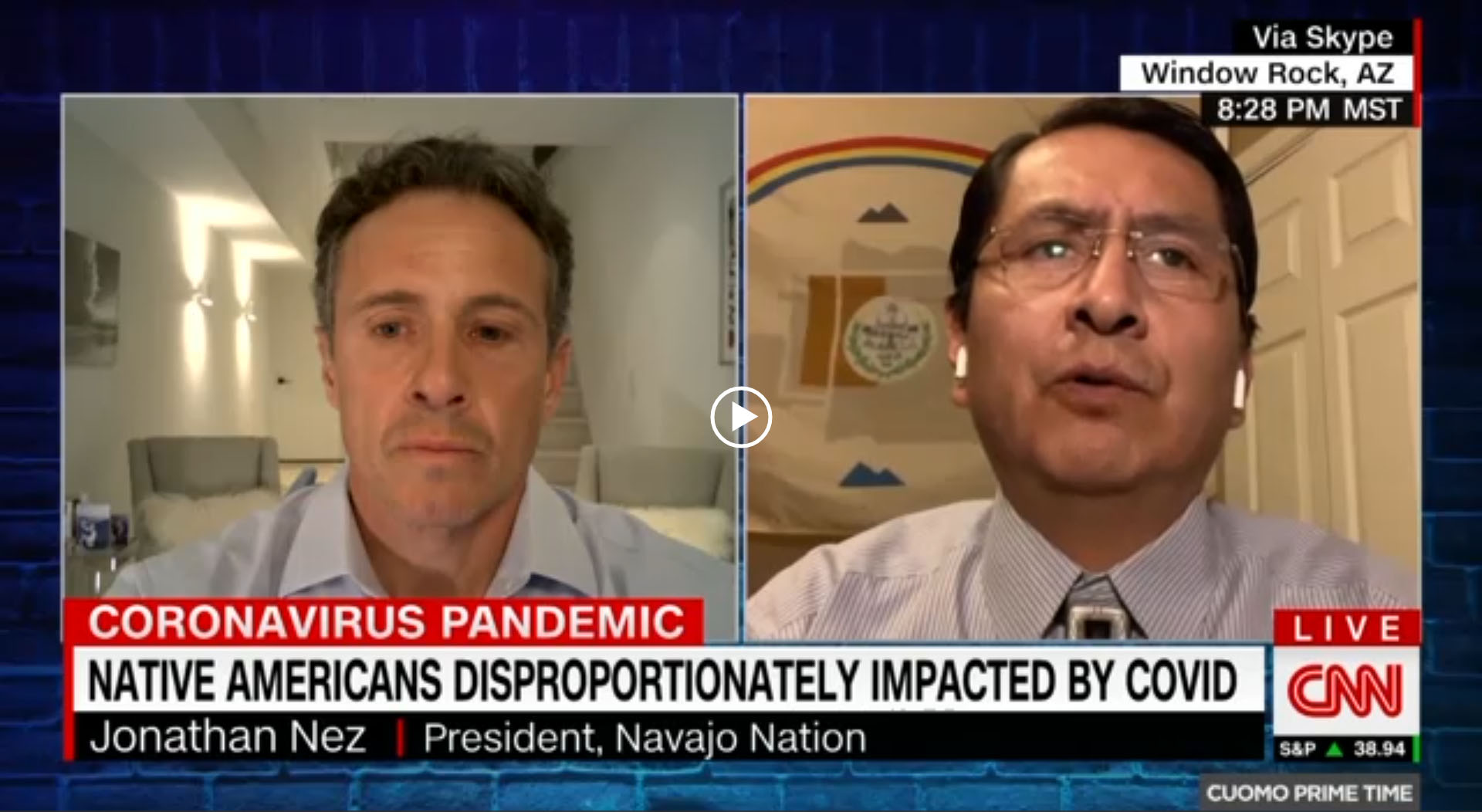 When you think of New York and New Jersey as having the highest coronavirus infection rates in the U.S., it makes sense. Big state. Travel hubs, density. Big cities. What about number three? Guess what it California? Seattle? Texas? No. The navaho nation. The largest native American reservation. Dealing with a number of mounting and unique challenges in battling covid-19. I know that you're not used to hearing about what's happening on the reservation. That's a disgrace in and of itself. It ends now. Let's be joined by president of the Navajo Nation. It is good to see you. Thank you for being with us.

>> Good evening, Chris. Thank you for having us on the show.

I'm sorry it's under these circumstances. Please, let the audience understand what you're dealing with.

>> Well, as of this evening, we have total number of tests given are 9,000. We have been aggressive testing our citizens here. Of those, positive cases 1,500. Negative results 6,800. And we have 58 deaths here. 27,000 square miles of land. 350,000 population here of navaho citizens. And let me just say that I want to say thank you to your brother. He's doing a great job. There in the state of New York. We're starting to team up together. And we're looking at ways to partner in the future. We'll be sending up gloves. We have a our own latex glove

manufacturing facility. And so we want to bless the state of New York. Their healthcare professionals on the front lines. And I know your brother is going to also help us with some of the extra supplies that he's got there in New York. It's a great partnership. Thank you to the movie stars. Sean pen and many others have been donating. Their time and money. And also getting the word out op what's happening here. And clear across the country, as a matter of fact. In all triable communities.

>> Here's what's bothers me. This story peeked my interest because it's a good story for New York, and my brother being the governor. It's because it is appalling to me that New York has to cut a deal or get into a cooperation agreement with the navaho nation in Arizona. Where the hell is the federal government? We do the research, and everything people were telling

me is true. You're getting bad tests and you have to pay for your own tests. They're not paying attention to the information. They're not coming to you. It's in the like it's a favor. You have agreements with the governor about what they're supposed to do and not do. What's the reality about how you're respected and disrespected. Under what's supposed to be the law.

>> Absolutely. We have a treaty relationship. A special relationship with the federal government. 150 plus years ago our navaho citizens were taking off this land. Taken on a long walk over 400 plus miles. To a place called fort -- they were ready to take us to Oklahoma and Florida. Our ancestors back then and our leaders back then said no, we want to go back to our home LAN. They signed that treaty and that treaty was our reason for going back to our homeland.

There was a relationship here where the navaho people at that time said United States, if you are ever in trouble we will be there to help. Guess what? You heard about the navaho utilizing the language to win World War II. The code talkers. Triable nations throughout the country have contributed greatly to this free country of ours and guess what? Sometimes the first citizens of the country are at the bottom of the list when it comes to federal aid. And that's what we have been trying to say for the past several weeks now. Why doesn't federal aid go directly to triable nations. Rather than pass through federal government agencies or states. It should go directly to the citizens that is intended for.

>> It's no irony we had a nurse on last night from Phoenix. Who went out and silently stood in the middle of a protest of

people saying it was a violation of freedom. Making them stay home. And you have the reservation there number three in case concentration. And you have to reach out to states on the other side of the country to get help. Because the federal government is leaving you in the breech. President, I want people to know the reality. Please know you have a channel. Through me. To tell people the reality of what's happening on the reservation.

>> Let me end with this, this is a great example of a sovereign state. State of New York. And a sovereign triable nation working together because of the lack of federal resources and aid. We're not just going to feel sorry for ourselves. We'll step up and bless our citizens hearts. We're stepping up to the plate to help each other out. It's a great story of resilience. Over coming tough times. We're all in this together. We all need to listen to those

>> It is the right message. Thank you for delivering it on the show. We are a call away. God bless you. I hope it is in some way able to make its way through without too much damage to the people you are in charge of.