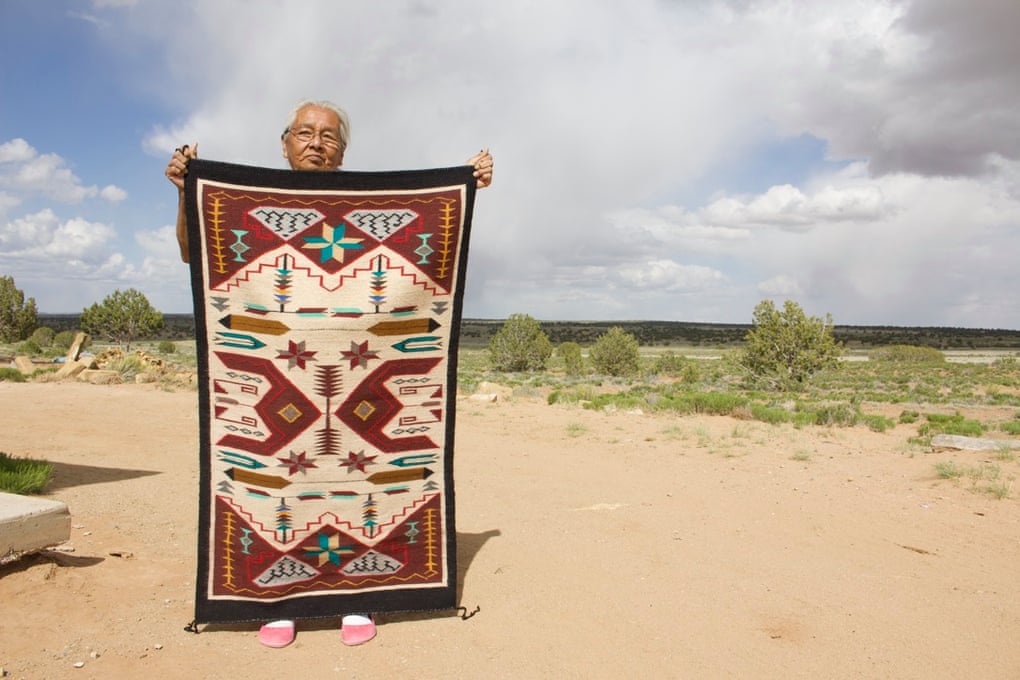 Mae Tso made pigments from plants and wove the hand-dyed wool into exquisite traditional rugs that were famous among art collectors. Photograph: Courtesy of her family

Native Americans have been among the worst hit in the state, which had the highest number of cases and deaths in the US in recent weeks.

Just going by the statistics, the odds for Mae Tso were not good. A revered tribal elder with extensive knowledge of Navajo traditions, Tso, 83, lived in the remote village of Dinebitoh on the Navajo Nation. She was in the most vulnerable demographic of the most vulnerable population in Arizona for succumbing to Covid-19.

But Tso was determined to not get sick. She had no chronic health issues and still wandered the high desert around her home to gather herbs for medicine. She also made pigments from plants and wove the hand-dyed wool into exquisite traditional rugs that were famous among art collectors. Angelina Jolie once bought one of her rugs, Tso’s family likes to brag.
Women have long been the leaders in Navajo culture. Now they're steering the fight against Covid
Read more

Tso was the matriarch of children, grandchildren and great-grandchildren living on a sprawling family compound that like many homes on the Navajo reservation had no running water. “She was always telling us to wash our hands,” said her daughter, Juanita Tso. “My mom was not afraid of much but she was very afraid of Covid.”

Tso hadn’t set foot in a public place since February 2020, but still, in mid-December she developed a dry cough that her herbal teas did not seem to shake. She started having difficulty breathing, while everyone in the isolated family compound began exhibiting Covid-19 symptoms.

Tso was admitted to the hospital in Tuba City on the Navajo reservation on 23 December with severe pneumonia. Juanita and other family members were relegated to trying to comfort her by standing outside the window of her hospital room where they talked and sang to her through the glass.

She passed away three weeks later, on 12 January. She was the third person in her immediate family to die from the virus and one of more than 13,100 people now in the Covid fatality column for Arizona.

The uncontrolled spread of the coronavirus in Mae’s home town Dinebitoh came amid a dire surge in cases across the state of Arizona this winter. On 3 January, the Arizona department of health services reported 17,200 new Covid-19 cases, the highest number in a single day since the pandemic began. Throughout the month, the Grand Canyon state recorded at least 5,000 new cases nearly every day. In recent weeks, it has consistently led the nation for the highest number of cases and the highest number of Covid-related deaths, according to the Centers for Disease Control and Prevention’s Covid Data Tracker. Cases declined slightly last week from the peak but total hospital beds for the state remained at more than 90% capacity.

Native Americans have been among the worst hit in the state. Comprising 26% of the population in Coconino county where the Arizona portion of the sprawling Navajo reservation is located, indigenous people have suffered 77% of the county’s Covid-19 deaths. And nearly 70% of all Navajo Nation deaths from the virus have been among tribal members over the age of 60, like Tso.

While several US states experienced record Covid-19 case surges after the holidays, Arizona health officials have been alarmed not only by the scale of the spread in all areas of the state but also by the cavalier attitude of many residents toward health safety measures.

“There is a population out there that for various reasons objects to mask wearing or doesn’t feel the problem is serious enough,” said Dr Joshua LaBaer, the director of Arizona State University’s Biodesign Institute. “Right now, in Maricopa county [where the Phoenix metro area is located] I have seen crowded restaurants that are supposed to be at 50% capacity but people are sitting shoulder to shoulder, not wearing masks and socializing. And we are in the middle of our worst surge ever.”

Even though the Phoenix Valley is the 10th largest metro area in the nation, many Arizona citizens are nostalgic for the state’s unruly, wild west past with its legendary cowboys, gun fighters and prospectors. The Arizona territory did not become a state until 1912, the last in the lower 48. And it was not until 2000 that it became illegal to fire a gun in the air in Arizona cities.

LaBaer grew up in Arizona and he attributes people ignoring health safety mandates to the state’s “very libertarian viewpoint”. He sums it up as: “Don’t get in my way. I want to do what I want to do.”

That attitude has been reflected in the state government’s handling of the crisis, too. When Arizona restaurants and bars reopened last August, the governor, Doug Ducey, ordered that reopenings could only take place if counties had fewer than 100 confirmed positive tests per 100,000 people. However, there was no similar policy established for closing businesses when cases climbed.

Last week, Arizona department of health data showed more than 10,000 cases per 100,000 people for Maricopa county and similar numbers for urban areas across the state. Yet along with restaurants and bars, gyms remain open. State universities and many school districts are holding in-person classes as well as interscholastic team sports.

“Governor Ducey wants to protect lives and livelihoods,” said the Ducey spokesman CJ Karamargin in December when Covid cases were first spiking. He said there were no plans to restrict businesses and the best hope for bringing the pandemic under control in Arizona was vaccinations.
‘Their defiance is fear’

Last week, Covid became the leading cause of death for Arizonans in all age groups, more than cancer or heart disease or accidents.

“If there had been a bomb set by a terrorist that only killed a fraction of this many people, Arizonans would be outraged,” said ASU’s LaBaer. “Yet here we are, just watching this virus kill people.”

Many of Arizona’s Covid-19 “rebels” may not fully grasp the “abstract concept” of the way Covid-19 spreads, often asymptomatically, from person to person, leaving some completely unscathed and others dead, LaBaer said.

Brandy Carothers’ husband came down with flu-like symptoms, including a loss of smell, over the New Year’s holiday. Carothers, a senior clinical research coordinator for the University of Arizona’s college of medicine in Phoenix, knew her husband had coronavirus although he was reluctant to seek medical care. Days later she became ill and insisted the entire family get tested for the virus. Carothers and her husband tested positive, along with their two young children, who remained asymptomatic.

Carothers has asthma and her infection progressed into double pneumonia. She was admitted to a Banner Health facility in Phoenix where she spent a week receiving sophisticated treatments.

Carothers’ husband didn’t believe in wearing masks. “My husband generally doesn’t wear a mask because he’s rebelling and he doesn’t like the way it feels on his face,” she said. “And he thinks the long-term use of masks is bad for your health because you are inhaling bacteria.”

Fully aware that such claims about masks are false, Carothers frequently urged her husband to mask up, even to wear a double-layer mask, she said. “My husband knows the virus is serious for some populations but he didn’t fit into those populations. So he said he didn’t want to stop living his life,” she said.

Carothers is not aware if her family’s Covid-19 experience has changed her husband’s attitude about masks, she said.

Dr Tommy Begay, a cultural psychologist at the University of Arizona’s college of medicine in Tucson, sees some Arizonians reluctance to wear masks in public places as more than just a show of swashbuckling independence. “Some people are obviously going out of their way to defy health mandates,” Begay said. “And for many it is a political statement in support of what Donald Trump stands for, which is white nationalism and a disrespect for science.”

Begay grew up on the Navajo reservation and he views the wild west nostalgia that is mythologized in Arizona as really being about “a time when everybody knew their place”.

He believes that despite the state’s high Covid-19 death rate, many Trump supporters are following the mask-disdaining example set by the former president as a way to cling to that past. “Their defiance is really fear,” he said. “They are afraid of the new majority in our country being made up of people of color.”

Data from the US Census Bureau predicts this transition will materialize in Arizona by 2030, 15 years before it happens for the entire United States. An early indication of the demographic shift came with the November 2020 election when historically red Arizona turned blue, just barely. Even though Biden carried Arizona, Trump garnered 1.6m votes, which was roughly 400,000 more votes than he got in 2016. In Begay’s view, the act of not wearing a mask keeps people feeling connected to Trump and conspiracy theories.

According to a recent study by the University of Southern California, white Americans are the least likely group to wear a mask when around people from other households. While only 46% of white people regularly wear masks, the study found that 67% of Black people wear masks, along with 63% of Latinos and 65% of people from other races.

However, like many other regions in the US, people of color in Arizona have borne the brunt of the pandemic. The counties with the highest number of cases are those with predominantly Latino or Native American populations. In Yuma county, which leads the state for cases per capita, one in six people have tested positive for the virus. Many are immigrants who work in the winter lettuce fields, staying in communal housing and riding crowded buses to work. On many Arizona reservations, tribal members abide by strict curfews and health mandates but poor, multi-generational households with a lack of infrastructure make it hard to keep the virus from spreading.

When Mae Tso’s condition in the hospital worsened in mid-January, her daughter Juanita gave her a teddy bear “to have something to hug” while alone in the sterile hospital room.

Juanita started to worry about how to perform Navajo burial practices under the stringent Covid-19 safety precautions if her mom were to die. “My mom was very traditional. At the very least she needed to have red paint put on her face for safe entry into the afterworld,” Juanita recalled thinking.

When Tso died, Juanita couldn’t dress her mother in the moccasins and turquoise jewelry as she had hoped – Mae was considered a biohazard. But a nurse put the red paint on Mae’s face after her last breath. Then she was zipped up in a body bag with her teddy bear.